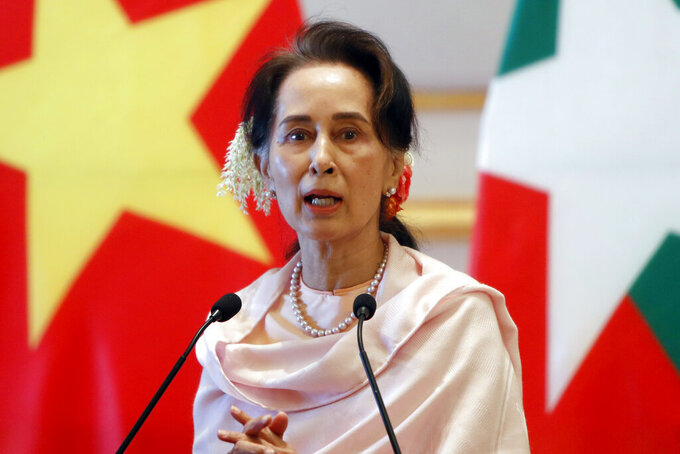 BANGKOK (AP) — A court in Myanmar has agreed to change the venue for the trial of an Australian economist and adviser to ousted Myanmar leader Aung San Suu Kyi on charges of violating the nation’s official secrets law, lawyers said Tuesday.

Sean Turnell was charged along with Suu Kyi and three former Cabinet ministers under the law in March, a month after the military ousted Suu Kyi’s elected government and seized power.

The decision by the country’s Supreme Court will move the trial from Yangon, Myanmar’s biggest city where Turnell was arrested, to the capital, Naypyitaw, said one of Suu Kyi’s lawyers, Kyi Win.

That will consolidate most of the legal cases against Suu Kyi in a single location. The cases, lodged at the behest of the military-installed government, are widely seen as an effort to discredit Suu Kyi and prevent her from returning to politics.

Violating the official secrets law carries a maximum penalty of 14 years in prison. The colonial-era statute criminalizes the possession, collection, recording, publishing, or sharing of state information that is “directly or indirectly, useful to an enemy.”

The exact details of Turnell’s alleged offense and those of the others have not been made public, though state television, citing government statements, has said the Australian academic had access to “secret state financial information” and had tried to flee the country.

Turnell has been confined in Yangon’s Insein Prison, known for decades for holding political prisoners.

Meanwhile, the trial of Suu Kyi, 76, and two colleagues continued Tuesday at a special court in Naypyitaw, a day after she had to cancel her participation because of illness. The court on Monday allowed her to return to her place of detention -- which is kept secret by the authorities -- after she explained that she was suffering from cold symptoms and felt dizzy on the ride to the court.

Another of her lawyers, Khin Maung Zaw, said her condition had visibly improved Tuesday when she returned to court, though she informed her legal team that she still felt some dizziness. Her co-defendants on several charges, former President Win Myint and Naypyitaw ex-Mayor Myo Aung, were also in attendance.

Suu Kyi is being tried in Naypyitaw on charges of sedition, defined as spreading information that could cause public alarm or unrest, and sometimes termed incitement; two counts of flouting COVID-19 pandemic restrictions during the 2020 election campaign; illegally importing walkie-talkies for her bodyguards to use; and unlicensed use of the radios.

Suu Kyi’s lawyers have argued in court that the sedition case should not be prosecuted, and both her team and the prosecution on Tuesday presented arguments to the court on that matter, Khin Maung Zaw said.

Two prosecution witnesses failed to show up to testify about the COVID-19 restrictions case and the testimony of a third was postponed, he said.

Khin Maung Zaw also told reporters that the defense lawyers had Suu Kyi sign documents appointing them to represent her in corruption cases filed in the central city of Mandalay.

The military seized power just before Suu Kyi and her National League for Democracy party would have begun a second five-year term in office. It said it acted because last November's election was marred by widespread fraud, an assertion that is widely doubted. Protests over the army takeover are continuing, along with growing armed resistance.