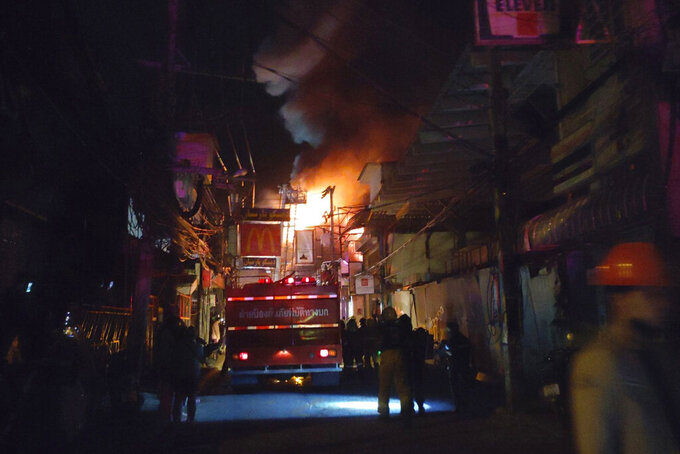 Narong Sattayakun, ASSOCIATED PRESS
In this Sunday, Sept. 12, 2021, photo, firefighters work the scene of a structure fire at the Nashaa Club, Pattaya, Chonburi province, Thailand. The fire in the famous Thai resort city of Pattaya has badly damaged the large nightclub catering to Indian tourists. A city official said there were no deaths or injuries from the Sunday night blaze at the club on the city's well-known Walking Street. (AP Photo/Narong Sattayakun)

There were no injuries or deaths in the Sunday night blaze, said Suptawee Ongnonyang, chief of Pattaya’s land disaster prevention agency. The Nashaa Club was closed, as are most entertainment establishments due a a government-ordered coronavirus lockdown.

The fire, which began in the Nashaa Club, spread to several adjoining structures on the city’s famous Walking Street that were also damaged, Suptawee told The Associated Press.

Pattaya is filled with bars, discos and restaurants that — before the pandemic — were patronized by millions of tourists each year. The city is notorious for its sex industry.

The pandemic devastated the city’s economy after Thailand closed its borders in April 2020 to most foreign visitors. The Nashaa Club was shuttered, then reopened in February this year but closed again in April as Thailand suffered badly from a third wave of the coronavirus.

Suptawee said the fire spread quickly due partly to the soundproofing material used in the club, and that a strong wind Sunday night spread the blaze to three other nearby establishments.

He said that it took about two hours to control the fire, which was extinguished around midnight. The cause is being investigated, he said.

An announcement on the club’s Facebook page said the fire resulted in “big damage.”

Its management vowed to reopen business “very soon” and requested people “not to comment or support any rumors or wrong information on social media regarding the unfortunate incident as Investigative agencies are working on that.”