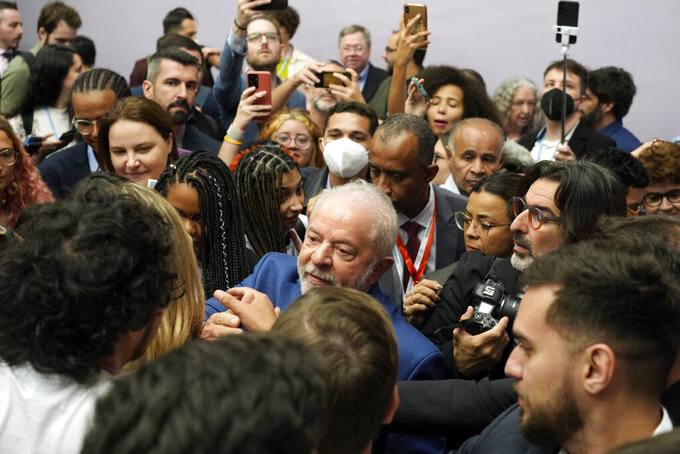 “I think we’re making progress. We heard a lot of goodwill in particular on the financing for loss and damage,” she told The Associated Press Thursday.

She said an offer from the European Union on climate financing “looks promising," adding, "I think there will be good advances.”

But she said lots of work is still needed.

A meeting took place late Thursday night that ahead of a stocktaking meeting and lasted about two hours.

Kerry called the talks “interesting” and “helpful to the process” but offered no further details.

— Lines in the sand need redrawing to reach climate deal

The chair of this year’s U.N. climate talks says facilities at the conference will be available until Sunday, indicating that the meeting could run far beyond its scheduled Friday close.

A letter sent to parties by Egypt’s Foreign Minister Sameh Shoukry states that catering and transportation will run through Nov. 20.

Delegates have warned that talks on several thorny issues are far behind where they should be at this stage of negotiations.

She said it didn’t get the special extra negotiating groups that other topics got and speaking for all small island nations she said those countries “are disheartened” by the way it has been managed.

“We have been waiting for two weeks for a text on funding arrangements for loss and damage,” Nicholson said. “We’re not sending the right signal to the world ... So we ask, Mr. President, where is the text?”

A Somali official said he is “disappointed” that little has been done to address loss and damage to nations vulnerable to climate change at the U.N. climate conference.

Mohamed Osman Mahmoud, an economic advisor to the Somali president, said he wanted to see “structured dialogue with accountability, with legally binding structure.”

He said that the talks on the issue are “not really encouraging.”

Mahmoud added that his country has experienced the devastating impacts of climate change, with some 7.8 million people impacted by drought. Somalia, one of the world’s poorest nations, has been experiencing its fifth consecutive failed rainy season.

U.N. Secretary General Antonio Guterres warned Thursday of a “breakdown in trust between North and South, and between developed and emerging economies” at this year’s international climate meeting, according to prepared remarks sent by his office.

“The world is watching and has a simple message: stand and deliver,” he told leaders after flying back to Sharm el-Sheikh, Egypt, where the two-week meeting is taking place.

Guterres said it was time to show that the world is prepared to help those who are getting most hurt by climate change, and to take the action needed to curb greenhouse has emissions.

He urged countries to “deliver the kind of meaningful climate action that people and planet so desperately need,” adding that there was “no time for finger pointing” with just 24 hours left before the official close.

“The blame game is a recipe for mutually assured destruction,” he said.

German Foreign Minister Annalena Baerbock says her country is in favor of providing poor nations with financial aid to cope with the loss and damage they suffer as a result of climate change.

But she says money for this should not come only from the industrialized nations, but also major emerging economies whose greenhouse gas emissions have increased sharply in recent decades.

China, India and oil exporting countries such as Saudi Arabia are fiercely opposed to the idea that they should contribute to funds for loss and damage that are being discussed at this year’s U.N. climate talks in Egypt.

Baerbock told reporters Thursday that “it is true that we in Europe and North America, as industrialized countries with our prosperity based on fossil fuels, bear responsibility for the climate damage of the recent past and most of those in the present.”

“But all major emitters of today bear responsibility for the climate damages of the future,” she said.

Some 150 countries have now signed up to the Global Methane Pledge, an effort to cap the release of the greenhouse gas supported by the U.S. and European Union.

U.S. climate envoy John Kerry gave an update on the pledge, which was launched at last year’s COP26 meeting in Glasgow, Scotland with about 100 countries signed up.

The pledge targets climate-damaging leaks, venting and flaring from natural gas industries. Kerry said it will also target natural gas emitted in the agriculture and waste industries, through such methods as altering the diets of cattle and pigs.

Kerry and the European Union’s top climate official, Frans Timmermans, said the pledge focuses on simple fixes, such as tightening leaky wellheads, to achieve big reductions in methane emissions, which are for more potent than carbon dioxide.

“If we do these simple things the baseline assessment indicates we can avoid 0.2 Celsius in global warming in atmosphere between 2040 and 2070,” Timmermans said. “Every decimal less warming will be important, crucial even.”

The head of the European Parliament at the U.N. climate conference described the cover text published by the Egyptian presidency of the conference as “a bit of wish list.”

Bas Eirkhout told The Associated Press that Egypt had included “all the topics” in the document and put it forward to the delegates.

He said the document included many disputed topics. He called for focusing on priorities including mitigation, loss and damage, and shortening the document.

“I think the proposal, the non-paper was too broad, too many topics, too vague language and too many items, which I don’t think have to be in a covered decision,” he said.

On loss and damage, he said the European Union wanted to ensure that climate funds go to the right people and communities.

“We don’t need official funds that then sometimes ends in the pockets of some regimes ... I think that is also important to be discussed,” he said.

The European Union climate chief said there was a “misunderstanding” over the cover text that the Egyptian presidency of the U.N. climate conference distributed.

“It wasn’t really a proposal,” said Frans Timmermans, who is also the EU’s executive vice president. “It was just sort of a gathering together of everything they had received, and they sent it on to the parties.”

He said they were still waiting for “their real first proposal” to discuss it.

Timmermans also said keeping the key 1.5 degree Celsius (2.7 Fahrenheit) warming target alive should be “the starting point” and nations should also make progress on the issue of compensation for nations vulnerable to climate change, known as loss and damage.

“We are willing to move forward on loss and damage, and I hope what we have signaled as a possible landing zone could also be acceptable to other parties,” he said.

Delegates from India, Norway and Tuvalu told The Associated Press that meetings on the overarching decision would continue and there was still a lot of work to do.

Seve Paeniu, finance minister of Tuvalu, expressed concern at the length of the draft put forward by the Egyptian presidency early Thursday, with less than 48 hours left on the clock.

Henrik Hallgrim Erikse wouldn’t rule out a deal by the official close Friday but said it would be challenging.

Germany announced Thursday that it is increasing the amount it provides each year to help countries adapt to climate change to 60 million euros (dollars).

Germany, which previously provided 50 million euros a year, is the biggest single donor of the Adaptation Fund.

The fund has disbursed more than $900 million for projects in almost 100 countries since 2010.

An African Union official said he expects no deal on climate financing in this year’s United Nations conference on climate change, due to the widening gap between developed and developing countries.

Paul Elvis Tangem, the coordinator for the Great Green Wall Initiative at the African Union Commission, said many countries have expressed concerns about “how far it (loss and damage discussions) can go.”

“I don’t think we are going to have any funding for loss and damage now,” he said. “But I believe that we’ll have a dedicated funding” in the next conference, he said.

“Waiting for the next COP or even COP29 is not an option for us. We’re not walking away without this fund,” Kathy Jetn̄il-Kijiner said at a press panel. “We’ve been really clear. We need the fund now and it needs to be a fund.”

She said momentum is gaining around the idea of a funding mechanism for loss and damage suffered by developing countries bearing the brunt of climate change. “We’re doing our best to keep holding the line and pushing the ambition.”

The Marshall Islands are a chain of islands between Hawaii and the Philippines, most of which are no more than two meters (6.5 feet) above sea level.

Sherry Rehman, climate minister for Pakistan, said developing countries would continue to press hard for a deal on the issue of ‘loss and damage’ at this year’s U.N. climate talks in Egypt.

Rehman told reporters Thursday that the group of countries she chairs, known as G77 and China, wants “at the very least a political announcement of intent” on rich polluters providing new financial aid to poor nations for the effects of global warming.

She made clear that she didn’t not expect “a slew of finance” to result from the meeting in Sharm el-Sheikh but added that “if this continues to be kicked down the road we will see it as a climate justice denied.”

Rehman said she was aware that some countries “are anxious about liabilities and judicial proceedings.”

“I think we can work around all those anxieties,” she said. “The idea here is not to make any one country or group of countries uncomfortable or put them in an adversarial position.”

But she said the recent devastating floods in her own country, causing tens of billions of dollars in damage, showed how people who have done little to cause climate change are being hit hard.

“That dystopia that came to our doorstep will come to everyone’s,” she said. “So before it comes to that point, let’s learn to work together and bring some focus and real ambition for climate justice and delivery on joint goals.”

Senior western officials have met with the Egyptian diplomat chairing this year’s U.N. climate talks amid concerns that negotiators may not be able to reach an agreement.

Sharma’s office said the three officials told Shoukry that the recent pledge made by the Group of 20 major developed and emerging economies in Bali “should be the baseline and not a ceiling” at the climate talks, known as COP27.

“The last thing anyone wants is for this COP to end without consensus,” they said, according to Sharma’s office.

A draft decision proposed by host Egypt for this year’s U.N. climate talks has surprised negotiators who say it includes ideas never previously discussed at the two-week talks.

This includes a call for developed countries to achieve “net-negative carbon emissions by 2030” — a far tougher target than any major nation has so far committed to and which would be very hard to achieve.

Diplomats, speaking on condition of anonymity due to the sensitivity of the issue, say the 20-page draft released early Thursday is far more bloated than what would normally have been expected at this stage of negotiations.

The talks are due to wrap up on Friday but it is not unusual for the annual meeting to go into overtime.