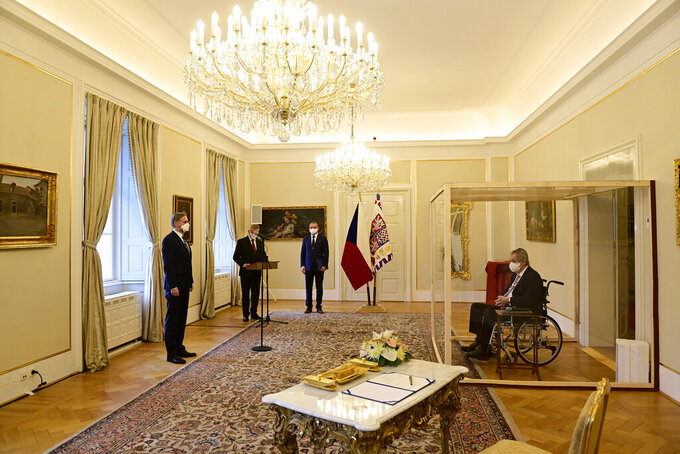 Roman Vondrous, ASSOCIATED PRESS
Czech President Milos Zeman, right, in a transparent cube because he tested positive to COVID-19, appoints ODS leader Petr Fiala, left, as Czech Prime Minister at the Lany manor, near Prague, Sunday, Nov. 28, 2021. The Czech president has sworn in Petr Fiala as the country’s new prime minister following last month’s parliamentary election. Milos Zeman and Fiala, the leader of the coalition that captured most votes in the Oct 8-9 vote were separated by a clear screen during the ceremony at the presidential chateau in Lany, west of Prague, after the president tested positive for the coronavirus and must isolate. (Roman Vondrous/CTK via AP)

Milos Zeman, in a wheelchair, was separated from Fiala and the other officials by transparent panels during the ceremony at the presidential chateau in Lany, west of Prague. The president tested positive for coronavirus last week and must isolate.

Following the Oct. 8-9 vote, a three-party, liberal-conservative coalition known as Together, composed of the Civic Democratic Party, Christian Democrats and the TOP 09 party, led with a 27.8% share of the vote.

Together teamed up with a center-left liberal coalition made up of the Pirate Party and STAN — a group of mayors and independent candidates — which came in third place with 15.6% of votes.

The new partnership will hold 108 seats in the 200-seat lower house of Parliament, relegating populist Prime Minister Andrej Babis and his centrist ANO (YES) movement to the opposition.

The five parties in the future governing coalition have agreed on a power-sharing deal. They are closer to the European Union than Euroskeptic Babis.

Fiala, 57, who has led the conservative Civic Democratic Party since 2014, is a professor of political sciences. Previously, he served as Education Minister between 2012-13.

It’s not immediately clear when Zeman might appoint the entire Cabinet. Zeman said he will meet the candidates for the ministers between Monday and Dec 13 to discuss their future jobs.

Zeman, 77, was only discharged from the capital’s military hospital on Saturday following more than a month's treatment for an unspecified illness and then a couple of days of concern after he tested positive for the coronavirus. The ceremony had originally been due to take place on Friday.

He was rushed to the hospital on Oct. 10, a day after the election for the lower house of parliament, and was treated in an intensive care unit. His condition was attributed to an unspecified chronic disease.