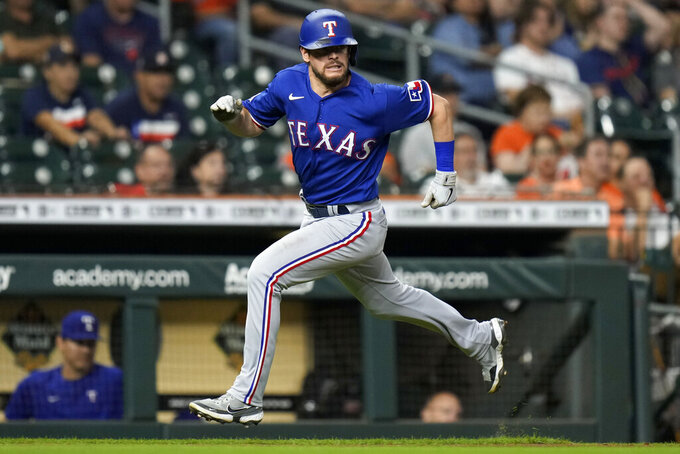 HOUSTON (AP) — José Altuve scored the winning run on a wild pitch with two outs in the 10th inning as the Houston Astros rallied for a 4-3 win over the Texas Rangers on Wednesday night.

“That’s what you can an ugly win,” Houston manager Dusty Baker said. “I mean, we’ll take it. A win’s a win. In the big leagues, the hardest thing to do is win. … Right now, we are scratching and clawing for everything we can get.”

“It wasn’t really lefty-righty, it was just it was Alvarez,” Beasley said. “Pick your poison there. Who do you want to beat you? I take my chances with right on right, with Bregman with Johnny and the power sink. I didn’t want to give Alvarez a chance to beat us there, but ultimately, he did beat us because we walked the bases loaded and threw a wild pitch.”

The AL West-leading Astros maintained a five-game lead over the Yankees for the best record in the league.

Yuli Gurriel hit an RBI single in the fourth, and Kyle Tucker added a two-run homer in the sixth for Houston, tying the game at 3-all.

Nathaniel Lowe hit a solo home run to right in the first and Marcus Semien and Kole Calhoun added RBI singles in the third to give the Rangers a 3-0 lead.

Texas starter Cole Ragans threw three no-hit innings with three strikeouts and three walks. Ragans, who had been on the 15-day injured list since Aug. 23 with a left calf strain, was activated before the game.

Neris made a diving catch on Bubba Thompson’s bunt attempt to leadoff the 10th. Neris came in and dove to his right to snag the bunted pop up, keeping Nick Solak on second to start the extra inning.

Neris said it was the first time he had made a diving grab that he could remember.

“I saw the ball fly close to me,” Neris said. “I got a chance, so I said ‘Let me take the out because it’s important.’ I didn’t think anything more.”

Rangers: RHP Jon Gray (left oblique strain) threw a live batting practice session prior to the game. … RHP A.J. Alexy was optioned to Triple-A Round Rock to make room for Ragans on the roster. … OF Eli White went 0 for 1 and played two innings in center field for Round Rock in the first game of a rehabilitation assignment on Wednesday.

Astros: RHP Justin Verlander (right calf) threw off the slope of the mound on Wednesday. Verlander said the calf is healing and progressing. He will continue to do mound work, then move to agility last, he said. “I’m optimistic, but also being cautious, particularly given the time of the year,” Verlander said. “Not trying to overly push things, but I think things have gone as good as anyone could have hoped for to this point.” … Utility player Aledmys Díaz (groin) will start a rehabilitation assignment with Triple-A Sugar Land on Thursday.

Rangers: After a day off on Thursday, RHP Dane Dunning (3-8, 4.37 ERA) is slated to start Friday in the first game of three-game series as the Rangers host the Blue Jays, who are scheduled to start RHP Ross Stripling (7-4, 3.03 ERA).

Astros: Following an off day on Thursday, RHP Lane McCullers Jr. (2-1, 2.08 ERA) is scheduled to start Friday opposite Angels’ RHP Michael Lorenzen (6-6, 4.94 ERA) as the teams start a three-game series in Houston.