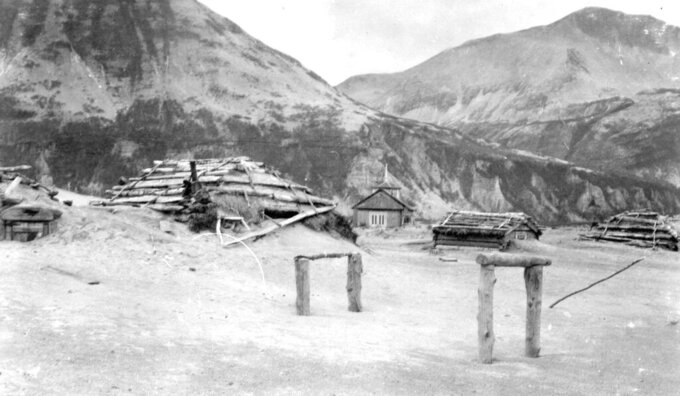 G.C. Martin, ASSOCIATED PRESS
FILE - This June 1912, file photo provided by the U.S. Geological Survey shows ash drifts around Katmai village's then-new Russian Orthodox church after the eruption of Novarupta Volcano in Katmai National Park and Preserve in Alaska. An unusual alert was issued by volcano scientists Wednesday, Nov. 17, 2021, warning that an ash cloud was headed toward Alaska’s Kodiak Island. The ash is from the powerful 1912 eruption of Novarupta, a volcano on the Alaska Peninsula that dropped volcanic ash that is still visible today. (G.C. Martin/U.S. Geological Survey via AP, File)

ANCHORAGE, Alaska (AP) — Volcano scientists issued an alert Wednesday, warning that a cloud of ash — from an eruption more than century ago — was headed toward Alaska’s Kodiak Island.

The ash is from the powerful 1912 eruption of Novarupta, a volcano on the Alaska Peninsula that dropped volcanic ash that is still visible today.

Strong northwesterly winds in the vicinity of Katmai National Park and Preserve and Valley of Ten Thousand Smokes on Wednesday kicked up the loose volcano ash.

“Generally, this time of year, we get these some these northwestern winds that can come down from the Katmai region and really scour some of the free ash that that’s deposited from the 1912 eruption and then bring it up to height," Hans Schwaiger, a U.S. Geological Survey research geophysicist at the Alaska Volcano Observatory, told The Associated Press.

Winds were expected to carry the ash about 100 miles (161 kilometers) southeast toward Kodiak Island, and an aviation alert to aircraft was issued for the low-lying event. Scientists estimated the cloud would not go above 7,000 feet (2,133.6 meters).

Some of these events can cause a light dusting of ash in nearby communities.

“This particular one looks like it’s not as ash rich as some of the other ones so there’s probably going to be negligible ash fallout from it,” Schwaiger said.

The three-day Novarupta eruption, one of the world’s largest, began June 6, 1912, and sent ash as high as 100,000 feet (30,480 meters) above the Katmai region, located about 250 miles (402 kilometers) southwest of Anchorage. The U.S. Geological Survey estimates 3.6 cubic miles (15 cubic kilometers) of magma erupted, about 30 times what spewed from Mount St. Helens in Washington state 40 years ago.

The Novarupta eruption was the most powerful of the 20th century and ranks among the largest in recorded history.

The ash was deposited in what is now known as the Valley of Ten Thousand Smokes, depositing about 600 feet (183 meters) of ash in places.

High winds and dry, snow-free conditions will produce these ash clouds intermittently, the observatory said in a statement, adding that there is no eruption in place.

The statement said all seven of the volcanos in the Katmai area, including Novarupta, remain at the lowest level of green, or normal.

Kodiak Island has a population of about 13,000 and is home to a large U.S. Coast Guard base. It is accessible only by airplane and ferry boats. The fishing industry is the predominant business on the mountainous island.