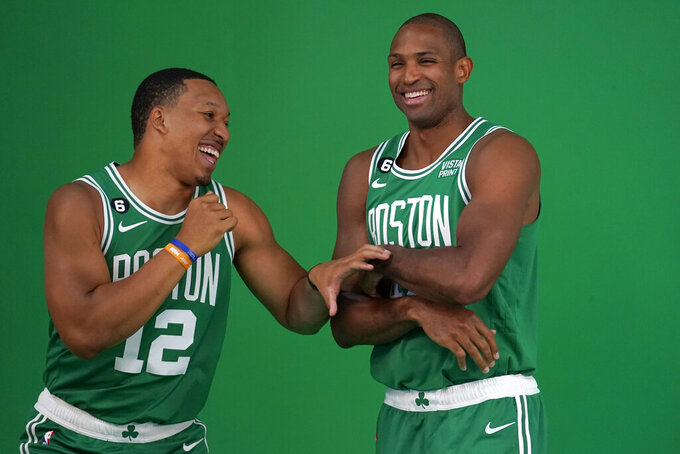 BOSTON (AP) — Joe Mazzulla didn’t want his first practice as the Celtics interim coach to feel any different than his previous three years as an assistant.

So when he arrived at the team’s facility Tuesday for Boston’s first training camp workout, he did his best to keep everything about his routine the same, right down to where he parked.

“I drive a minivan. … And I’m not changing it,” Mazzulla said. “I park in the same spot. I do what I’m supposed to do. And I think that’s part of it. The same thing I’m asking the players to do I have to do. I’m going to do my job. I have to do it one day at a time and I’m not going to skip any steps.

“But I’m not turning in the minivan.”

As the entire organization continues to absorb the changes that'll come with the year-long suspension of coach Ime Udoka, what Mazzulla observed most during Boston’s first practice was a team eager to get back to some sense of normalcy.

“Once we got out on the court, it was just nice to get back out the court and review our defense and to talk about offense and doing what we do,” veteran Al Horford said. “It’s a good thing to just play basketball. That’s what we’re here for. It’s important to just start this thing back up again.”

Mazzulla reiterated that he won’t be try to reinvent things. It's why Tuesday’s practice was mostly a mirror of their workouts from last season, right down to the structure, timing and template of the drills.

He'll also seek input and feedback from the players, he said, early and often.

“I think it’s important to do it through collaboration. What we’ve done here over the last year has been really successful,” Mazzulla said. “So sticking to what the guys are comfortable with has been the most important thing.”

Grant Williams said Mazzulla's familiarity with the team stood out the most.

“He knows these guys better than anyone because he's been around them for four years,” Williams said. “Both the highs and lows, he was with us when we were losing two years ago, when we were winning last year. So, he has a pretty good understanding of what we need and where we need to improve. We're also building on what we've had success with.”

In his previous three seasons as an assistant, Mazzulla was accustomed to being active on practice days, whether it was running a drill, directing players to the right spot during a scrimmage or even just corralling loose balls.

While his new title calls for him to be a more holistic observer and taskmaster, he still jumped in when he had the chance.

“I tried to end today just being on the court with the guys because that’s something that I miss,” Mazzulla said. “There are moments when I’m walking around like, what am I supposed to be doing? But for the most part I love being out there with the guys. They’re great guys and that’s where I find my joy. That’s where I want them to get theirs.”