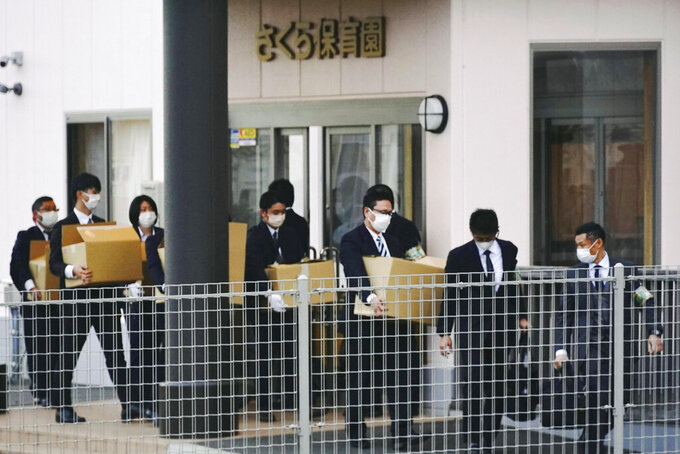 123617+0900, ASSOCIATED PRESS
Police investigators carry boxes of documents out of Sakura nursery school in Susono city, Shizuoka, central Japan, Sunday, Dec. 4, 2022. Japanese police said Monday, Dec. 5, that they have arrested three teachers at the nursery school in central Japan on suspicion they routinely abused toddlers, such as hitting their heads, holding them upside down and locking them up in a bathroom, a case that triggered outrage across the nation. (Kyodo News via AP)

TOKYO (AP) — Police have arrested three teachers at a nursery school in central Japan on suspicion they routinely abused toddlers, including hitting their heads, holding them upside down and locking them up in a bathroom, in a case that triggered outrage and allegations of a cover-up.

The Shizuoka prefectural police said they arrested three women on Sunday on suspicion of assaulting at least three toddlers in June at a nursery school in the city of Susono at the foot of Mount Fuji.

Susono Mayor Harukaze Murata told reporters Monday that he also filed a criminal complaint against the school director, Toshihiko Sakurai, for allegedly covering up the abuses. He urged police to widen their investigation.

In one case in June, one of the teachers is accused of holding a boy upside down. Another teacher pushed a girl in the face, according to police, and the third slapped the head of another boy.

Their arrests followed Saturday's police search of the private school in response to the city’s revelation last week of 15 counts of alleged abuses between June and August.

Results of an internal probe revealed the three teachers routinely abused toddlers in their care, including slapping their face and heads, forcing them to cry, threatening them with a cutter knife, verbally abusing the children by calling them “ugly” and “fat,” locking them up inside a toilet or storage room, according to the city.

Murata, the mayor, accused the school director of “covering up” by having other teachers sign a paper requiring them to conceal the problem and delaying giving an explanation to the parents, calling his handling “heinous.”

The three teachers, all in their 30s, reportedly told investigators that their treatment of the toddlers was “discipline,” while the director said he had the document signed only to protect privacy of those involved and denied trying to cover up the abuses.

The city has faced public criticism for sitting on the case for more than three months since a whistleblower first came forward to reveal “inappropriate” cases at the school in mid-August. Murata said he takes the criticism seriously and will take a pay cut for two months while also punishing three senior officials.

Separate investigations into possible abuse have been ongoing in two other nursery schools.

In Sendai, northern Japan, officials are conducting an internal probe following allegations that children had to strip into their underwear during meal time so they don't dirty their clothes. At a school in another northern city of Toyama, police are investigating teachers on suspicion they locked up crying children in a storage facility or poked their back with a stick to order them to move.