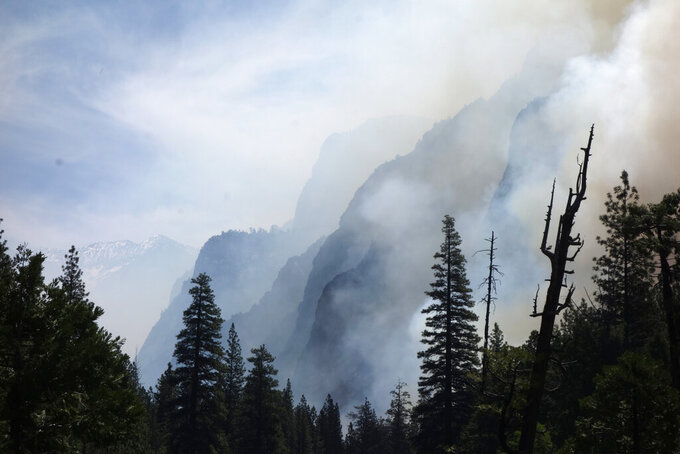 Brian Melley, ASSOCIATED PRESS
FILE - In this June 11, 2019, file photo, canyon walls are shrouded with smoke from a prescribed burn in Kings Canyon National Park, Calif. Ten of the world’s most treasured forests and nature reserves, including those in Yosemite National Park in the United States and Sumatra’s tropical rainforest in Indonesia, have gone from being net consumers of heat-trapping carbon dioxide in the atmosphere to net generators of it, a new U.N.-backed report shows. The first of its kind study by the International Union for Conservation of Nature and UNESCO cited factors like logging, wildfires and clearance of land for agriculture. (AP Photo/Brian Melley, File)

GENEVA (AP) — Sites containing some of the world’s most treasured forests, including the Yosemite National Park and Indonesia's Sumatra rainforest, have been emitting more heat-trapping carbon dioxide than they have absorbed in recent years, a U.N.-backed report said.

According to the report released Thursday, factors like logging, wildfires and clearance of land for agriculture are to blame. The excess carbon turns up from just 10 of 257 forests classified among UNESCO World Heritage sites.

The Switzerland-based International Union for Conservation of Nature and UNESCO, the U.N.'s cultural and educational agency, said their report provides the first-ever assessment of greenhouse gases produced and absorbed in UNESCO-listed forests. The study was based on information collected through on-site monitoring and from satellites.

The study adds to growing signs that human activities and the fallout from climate change — which scientists say has made weather extremes like drought and wildfires more likely — have transformed some natural carbon sinks that suck up CO2 from the air into net sources of it over the last two decades.

“All forests should be assets in the fight against climate change,” said Tales Carvalho Resende, a co-author of the report who works at Paris-based UNESCO. “Our report’s finding that even some of the most iconic and best protected forests, such as those found in World Heritage sites, can actually contribute to climate change is alarming.”

The consequences of climate change will be on many minds as world leaders gather in Glasgow starting this weekend for a key United Nations climate conference known as COP26.

The 10 sites that were net sources of carbon from 2001 to 2020 were the Tropical Rainforest in Sumatra; the Río Platano Biosphere Reserve in Honduras; Grand Canyon National Park and Yosemite National Park in the United States: Waterton Glacier International Peace Park in Canada and the U.S.; the Barberton Makhonjwa Mountains in South Africa; Kinabalu Park in Malaysia; the Uvs Nuur Basin in Russia and Mongolia; the Greater Blue Mountains area of Australia; and Morne Trois Pitons National Park in Dominica.

All told, however, the net carbon emissions from the 10 sites together amount to little compared to the total of roughly 190 million tons of carbon dioxide that are absorbed each year by all 257 UNESCO-listed forests. Of those, about 80 sites were net neutral, while the rest were net absorbers of carbon.

The 10 sites accounted for nearly 5.5 million tons of net carbon emissions. The most impactful was the Tropical Rainforest in Sumatra, which removed about 1.2 million tons from the atmosphere, but released another 4.2 million — making for net emissions of about 3 million tons. That was from a combination of logging and wood harvesting, as well as the impact of agriculture, the study found.

In the United States, Yosemite generated a net of approximately 700,000 tons of carbon, largely due to a bout of devastating wildfires in the area in recent years.

“World Heritage sites serve as a laboratory — as observatories for environmental changes,” he added. “What is happening at World Heritage sites is just the tip of the iceberg ... in terms of emissions, it represents only a small portion of the whole picture.”

Follow AP’s coverage of the climate summit at http://apnews.com/hub/climate