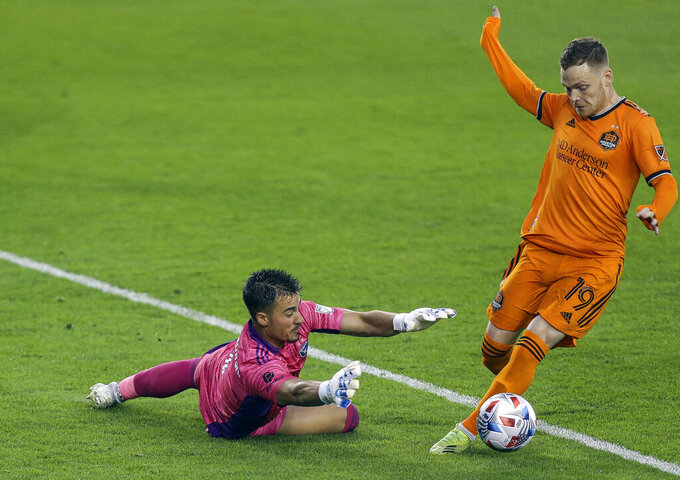 Godofredo A. Vásquez, ASSOCIATED PRESS
San Jose Earthquakes goalkeeper JT Marcinkowski (1) makes a save against Houston Dynamo FC forward Tyler Pasher (19) during the first half of an MLS soccer game at BBVA Stadium on Friday, April 16, 2021, in Houston. (Godofredo A. Vásquez/Houston Chronicle via AP)

Of course, Tyler Pasher thought of giving up soccer at times.

After a one-game stint in MLS in 2017, the 26-year-old Canadian forward toiled in the lower-division USL Championship for years. But this January he was acquired by the Houston Dynamo.

Pasher had been expected to take some time to adjust to the upper-tier speed, but he's given the Dynamo a distinctive offensive boost in the first two games of the season.

“I think every player that was in MLS and went down there has the same thought: It's not easy to go from a lower league back up to the higher league here in the United States,” Pasher said. “It's one of those where I just kind of said, 'Well, if it happens, great. If it doesn't, it doesn't.' So I just wanted to put my best foot foot forward because I had nothing to lose."

In the second season under former U.S. national team coach Tab Ramos, Houston has nowhere to go but up after finishing last in the Western Conference in 2020. The Dynamo won just four matches and gave up 40 goals last year.

“I really expected to have Tyler at this moment play maybe 20 to 25 minutes a game. But yet he's been a starter, he's played every minute so far, and I think he's had a lot of good moments in the first two games," Ramos said. "Hopefully, we can keep him going without too many ups and downs this season, but I'm looking forward to watching him.”

So far the Dynamo are 1-1, with a 2-1 victory at home over the San Jose Earthquakes in the opener and a 2-1 loss at Portland last weekend.

Pasher set up Maxi Urruti's goal against the Quakes. Then in Portland, Pasher's cross to Boniek García deflected off Portland's Cristhian Paredes for a goal.

“I think teams in the league will start to take notice and I know he's up for the challenge. Things may not go well all the time but that's just football,” Houston defender Zarek Valentin said. “Ultimately, he's got a great head on his shoulders and I'm excited he's with us, because he's one of the diamonds in the rough that we were able to pick from Indy.”

Pasher came to the Dynamo from Indy Eleven, where he had 10 goals and two assists in 15 games last season. He appeared in a game with Sporting Kansas City in 2017 but most of his time in Kansas City was spent with the lower-division Swope Park Rangers.

As it turned out, hard work and persistence paid off.

“Definitely at first it was difficult when I first got here," Pasher said. “When we played four or five preseason games, we played MLS teams, and I kind of found my feet quick. Tab gave me the opportunity to start the first game and I wanted to take full advantage of it.”

The Dynamo host LAFC on Saturday.

Austin FC confirmed defender Ben Sweat tore the anterior cruciate ligament in his left knee early in last week’s 3-1 win at Colorado and will undergo surgery. The team did not set a timetable for his return.

“We’re obviously disappointed for him. It’s a significant injury and will take some time to recover,” Austin coach Josh Wolff said.

Sweat, 29, had started both of Austin’s matches this season. Before joining the expansion club, Sweat played in 96 matches for Inter Miami and New York City FC.

The club announced Wednesday that designated player Tomas Pochettino would be available at Minnesota on Saturday. The Argentine midfielder was a last-minute scratch from the lineup against Colorado for what the team called a “league-related administrative issue" with his registration.

Lletget used the Spanish pejorative in an Instagram post while pranking teammate Julian Araujo. He removed the post and promptly apologized. He also cooperated with the investigation.

“I take full responsibility and ownership on what was an extremely poor and ill-thought phrase and have no excuse for my actions,” he said in a statement. “I am sorry and know the pain that this term has caused for so many.”

Lletget served the first game of the suspension this weekend when the Galaxy downed the New York Red Bulls 3-2.

Can Chicharito maintain his scoring tear? Javier Hernández has five goals in two games for the Galaxy this season, up from two goals all of last year. But the reigning MLS Player of the Week will be challenged on the road Sunday night against the Seattle Sounders.

“Right now, he’s on fire and we want him to keep going like that," Galaxy defender Jorge Villafaña said. "And obviously we are the guys behind him, backing him up and giving him the balls and everything, so we are working towards that goal. And once that energy gets out there, everyone gets through it and it pumps us up.”