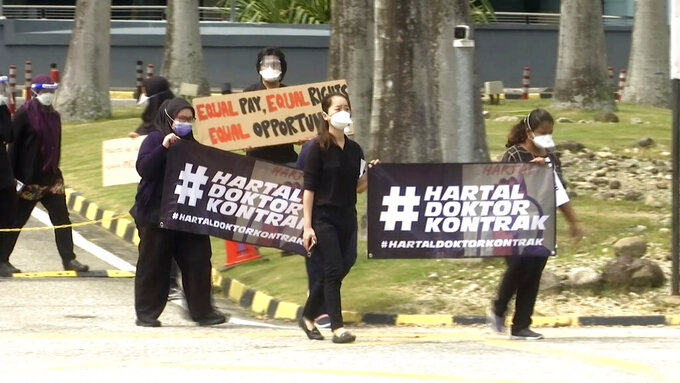 Uncredited, ASSOCIATED PRESS
In this image from video, doctors hold banners in Malay that read “Contract Doctors Walkout” while participating in a walkout held at the Sungai Buloh Hospital in Selangor, Malaysia Monday, July 26, 2021. Scores of doctors staged walkouts from Malaysian government hospitals on Monday, demanding fairer treatment for more than 20,000 contract doctors who play a key role in the fight against the worsening coronavirus pandemic. (AP Photo)

KUALA LUMPUR, Malaysia (AP) — Hundreds of contract doctors walked off their jobs in Malaysian government hospitals on Monday, demanding fairer treatment for more than 20,000 physicians who work without permanent positions and play a key role in the fight against the country's worsening coronavirus pandemic.

Since 2016, new medical school graduates practicing under supervision in hospitals are given temporary contracts rather than being employed permanently due to an influx of medical students. These contract doctors face an uncertain career path, earn less than permanent doctors and receive few benefits.

“We want to urge all Malaysians to join us to appeal to the government to treat us fairly as permanent doctors. We want equal rights to be able to further our education and to be absorbed as permanent staff," said a doctor who gave his name only as Mohamad. who was among dozens who joined the strike at Kuala Lumpur Hospital.

At the Shah Alam Hospital in central Selangor state, another doctor who identified himself as Umar said numerous attempts to negotiate with the health ministry had been unsuccessful. He said he has been a contract doctor since 2016 and sees no clear future without a permanent job.

The strike comes as new confirmed COVID-19 infections surged to a record high of more than 17,000 on Sunday, pushing the country's number of reported cases above 1 million. The total is an eight-fold jump from last year and up 77% since a national lockdown began June 1. Deaths have also surged to near 8,000.

The contract doctors' group said on their website that only 789 out of 23,077 contract physicians have received permanent placements, resulting in a healthcare system that has 60% contract medical workers.

The government says there are about 35,000 contract health care workers across the country, comprising around 23,000 doctors, 5,000 dentists and 7,000 pharmacists.

The government offered last week to extend the physicians' contracts for up to four years with better perks and career opportunities, but the contract doctors' group rejected that proposal, calling it “half-cooked" and saying it failed to address their concerns.

The group says the strike is symbolic and wouldn't affect hospital operations. The rallies ended peacefully as police watched. Police later said they would investigate the doctors for holding a banned public gathering amid the pandemic.