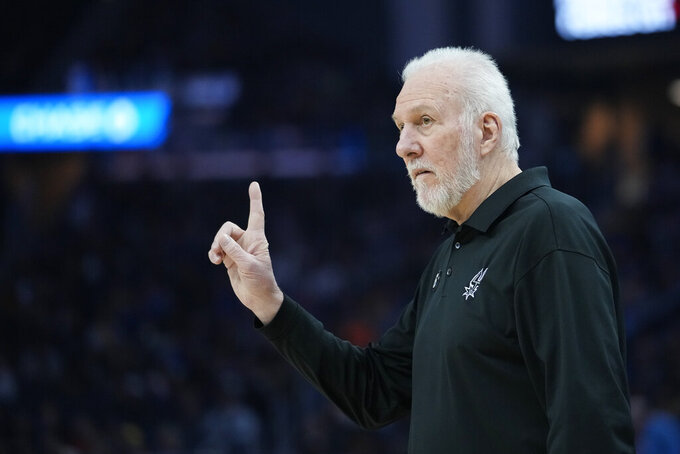 The 73-year-old Popovich apparently felt fine during his pregame media availability and preparations, but the winningest coach in NBA history then fell ill shortly before tipoff in Los Angeles on Sunday night.

“When something like that happens, you’re concerned,” said Spurs assistant coach Brett Brown, who ran the team in Popovich’s absence. “But the doctors have checked him out. I was just with him, and as we speak, he is fine.”

Brown said he learned Popovich wouldn’t be coaching “as I was walking out on the court ... 20 seconds before the game was going to begin.” Popovich stayed at the arena during the game, and he spoke to the team afterward.

“It’s always a human thing,” Brown said. “He’s a dear friend of mine. We’ve been with each other, known each other for a quarter of a century. That’s not a short period of time, and so my immediate reaction is, ‘How is he?’ He has such amazing endurance, and he’s such an amazing competitor, when something like that happens, you’re concerned.”

The Spurs provided no additional details about Popovich’s illness.

San Antonio lost its fifth straight, falling 123-92 to the Lakers to complete a winless seven-day road trip. The Spurs have lost 10 of 11 overall after a 5-2 start to the season.

Popovich has been the Spurs' head coach since 1996, making him the longest-tenured head coach in North America's major professional sports leagues. He has won five NBA championships and three NBA Coach of the Year awards while winning a league-record 1,350 regular season games.