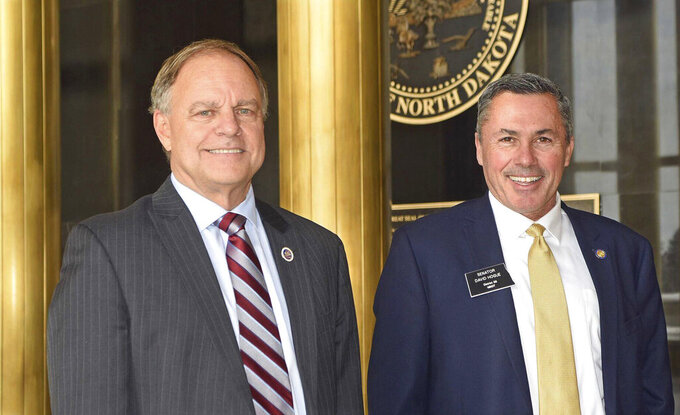 BISMARCK, N.D. (AP) — New House and Senate leaders elected by Republican majorities in the North Dakota Legislature said Tuesday that tax relief and cautious spending are among the priorities when lawmakers reconvene in January.

Sen. David Hogue, a Minot lawyer, and Rep. Mike Lefor, a Dickinson businessman, were chosen Monday night to two-year leadership terms by members of their respective chambers. They replace Sen. Rich Wardner and Rep. Chet Pollert, who are retiring.

It’s the first time since 2003 that the House and the Senate have both elected a new majority leader.

GOP Gov. Doug Burgum will give lawmakers a budgetary starting point with recommendations next month.

Fiscal analysts expect the state will have a budget surplus of about $1.5 billion in the next legislative session that begins Jan. 3, due largely to strong oil prices.

The additional dollars will mean even more pressure for lawmakers to spend.

“I think we need to be careful and stay conservative with what we’re doing with investments that we make, to make sure that they fit into our priorities because there’s a lot of different asks that I see coming forward,” Lefor said. “I think we just need to be picky about how we allocate the dollars.”

Said Hogue: “We’ll spend some, we’ll save some and we’ll give some back to the people and what the percentages of each are I can't tell you, but I think that’s probably what will happen.”

There is already promised legislation for property tax relief that would use interest from oil tax savings to help offset property taxes that go to schools. The other tax reduction plan, pitched by Burgum, would eliminate state income taxes for lower-earning North Dakotans while shrinking them for higher earners to a small flat tax, which he said would save taxpayers about $250 million annually.

Hogue and Lefor said they presently support a combination of both proposals.

Republicans emerged from last week’s election adding to their supermajorities, as Democrats dwindled to their lowest number of seats in years. Democrats have just four seats in the Senate and 11 in the House.

House and Senate Democrats will elect their leaders Tuesday night.

The election preceded a two-day meeting that began Tuesday at the Capitol, where lawmakers hear reports from the Legislature’s interim study committees. Officials said more than two dozen of the studies have inspired more than 30 pieces of proposed legislation.

The new legislative leaders will select appropriations chairs next month when the Legislature meets for its organizational session. They will replace House Appropriations Chairman Jeff Delzer, who lost in the June primary, and his counterpart in the Senate, Ray Holmberg, who resigned amid an ongoing investigation following a report that he had traded scores of text messages with a man jailed on child pornography charges.

Lefor said he will appoint Cooperstown Rep. Don Vigesaa to the powerful post, while Hogue said he hasn't made a decision for the Senate.