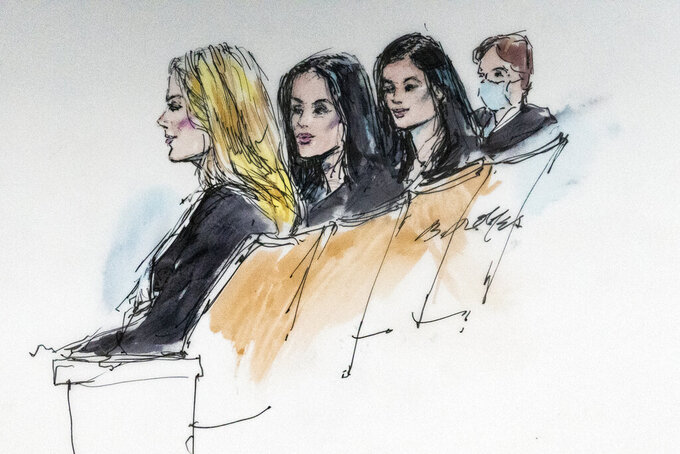 Bill Robles, ASSOCIATED PRESS
In this courtroom artist sketch, Khloe Kardashian, from left, Kim Kardashian, Kylie Jenner and Kris Jenner sit in court in Los Angeles, Tuesday, April 19, 2022. A jury has been seated in a trial that pits model and former reality television star Blac Chyna against the Kardashian family, who she alleges destroyed her TV career. (Bill Robles via AP)

In her closing argument, Chyna's attorney Lynne Ciani argued that it was unreasonable for the four women to have believed that her client violently attacked her former fiancé Rob Kardashian.

“Forget who they are; forget about how famous they are,” Ciani told the jury. "Was it reasonable for the defendants to believe that their son or brother’s version of the events that he had been brutally attacked?”

In emotional and often angry testimony, Rob Kardashian said during the trial that he feared for his life on the night of Dec. 14 and morning of Dec. 15, 2016, when Chyna twice pointed a gun at his head, pulled a phone-charging cable around his neck and repeatedly hit him with a metal rod while under the influence of alcohol and cocaine.

He testified that the violence left no visible injuries, nor did he report the attack to anyone, and his mother and sisters said the same when each took the stand.

“He didn’t have a mark on him,” Ciani said. “There was no call to the police, no trip to the hospital, not even a Band-Aid.”

Chyna is suing the four women for defamation and interference with contract, alleging they sought to get the couple's “Keeping Up With the Kardashians” spinoff “Rob & Chyna,” canceled before its second season.

Kardashian attorney David G. Rhodes argued during his closing that the women had every reason to believe the accounts of the attack from Rob Kardashian and from Kris Jenner's longtime boyfriend Corey Gamble, who arrived at the scene, broke up the dispute and was a key defense witness.

“Do you remember how Rob looked on the stand yesterday? His pain was real," Rhodes said. “This is a real family. Yeah, they’re famous, but they’re real people. He got really badly hurt here.”

All four of the defendants were in the front row of the courtroom for closing arguments, as they were for most of the nine-day trial.

Kim Kardashian’s boyfriend, “Saturday Night Live” star Pete Davidson, sat in the back of the courtroom during closings and greeted her with a hug and a kiss in the hallway outside before they and the rest of the family were ushered by deputies into a private waiting area they’ve used throughout the trial.

In her testimony, Chyna said that an all-night celebration of the announcement their show was getting a second season turned into a bitter fight when Rob Kardashian took her phone looking for evidence of communications with other men, but it never got violent.

She testified that she had wrapped the phone-charging cord around his neck playfully, and picked up his always unloaded gun off the nightstand, as a joke. She admitted that in her anger she broke some things.

“There was damage to a gingerbread house; there was a damaged TV,” Ciani said. “And that’s where it stopped.”

Rhodes zeroed in on the gingerbread house in his argument, in which he cast Chyna as a publicity-seeker desperate for a piece of what the Kardashians have.

“Why would you attack a gingerbread house in your rage? What does it represent?” Rhodes said. “It represents everything about the Kardashian brand — it’s over the top, it’s big, it’s beautiful, it’s almost silly, and when she saw that gingerbread house she was venting her anger on everything she was not going to be.”

Rhodes argued that regardless of what happened between the couple, the show ended because their relationship ended, as all the executives overseeing the show testified during the trial.

“It wasn’t her show,” Rhodes said. “It’s not the ‘Chyna and Rob’ show, it’s not ‘Chyna’ show, it’s the ‘Rob KARDASHIAN and Chyna’ show. It was a show about a relationship. That’s at the center of the whole case.”

Ciani and Rhodes both focused in their closing arguments on Kris Jenner, whom the lawsuit alleges was the “ringleader” of the attempt to shun Chyna.

Rhodes asked jurors to consider why Jenner would believe the attack happened.

In the civil case, nine out of 12 jurors will need to agree on whether each of the Kardashian defendants either knowingly lied about Chyna abusing Rob Kardashian, or spread the word about it with reckless disregard for the truth. The same number will need to decide whether each illegally interfered with Chyna’s contract with the E! network, which aired both “Rob & Chyna” and “Keeping Up With the Kardashians.”