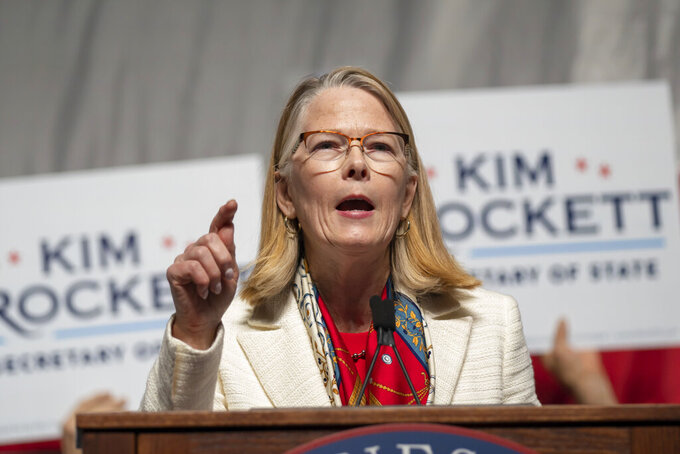 Glen Stubbe, ASSOCIATED PRESS
FILE- Kim Crockett speaks during the first day of the Minnesota State Republican Convention, May 13, 2022, at the Mayo Civic Center in Rochester, Minn. In Minnesota, the presumptive Republican secretary of state nominee, Kim Crockett, has called the 2020 election a “train wreck” and accused state election officials of using the pandemic as “cover to change how we vote, but also how the vote is counted.” (Glen Stubbe/Star Tribune via AP, File)

MADISON, Wis. (AP) — Wisconsin’s secretary of state has no role in elections, but that could change if Republicans are able to flip the seat this year and pass a law that would empower the office with far more responsibilities.

All three GOP candidates competing for the nomination in Tuesday’s primary support the shift and echo former President Donald Trump’s false claims that fraud cost him the 2020 election.

If successful, the move would be a bold attempt to shift power to an office Republicans hope to control going into the 2024 presidential election and would represent a reversal from just six years ago when Republicans established the Wisconsin Elections Commission with bipartisan support. In 2020, Democrat Joe Biden won Wisconsin by about 21,000 votes in the presidential race.

“This is not about policy,” said David Becker, a former U.S. Justice Department attorney who heads the nonpartisan Center for Election Innovation and Research. “It’s about election outcomes and only election outcomes.”

Once an under-the-radar contest overshadowed by campaigns for governor and state attorney general, races for secretary of state are drawing tremendous interest and money this year, driven largely by the 2020 election, when voting systems and processes came under attack by Trump and his supporters. There is no evidence of widespread fraud or manipulation of voting systems occurring in the 2020 election.

There are also primaries Tuesday in secretary of state races in Minnesota, Connecticut and Vermont. In Minnesota, the leading Republican candidate has called the 2020 election “rigged” and has faced criticism for a video attacking three prominent Jewish Democrats, including the current secretary of state, Democrat Steve Simon, who is seeking reelection.

Although the stakes are high, the Wisconsin primary for secretary of state has been mostly quiet. The incumbent, Democrat Doug La Follette, has barely been campaigning. In June, the 81-year-old, who was first elected to the position in 1974, opted to take a two-week trip to Africa.

La Follette has raised about $21,000, according to the most recent campaign finance reports. That’s not unusual because the office’s only duties are to sit on a state timber board and to verify certain travel documents.

La Follette has said he decided to run again to stop Republicans from meddling with elections, citing Trump’s call to Georgia's secretary of state, Brad Raffensperger, after the 2020 election asking him to “find” enough votes to overturn Biden’s win in the state. La Follette’s primary opponent, Dane County Democratic Party Executive Board Chair Alexia Sabor, has raised about $24,000.

The Republican candidates argue that dismantling the elections commission and empowering the secretary of state to oversee elections would allow voters to hold someone accountable for important election-related decisions. They have all sharply criticized decisions made by the commission heading into the 2020 election, when the COVID-19 pandemic brought major challenges to running elections.

To accomplish their goal, Republicans also would need to defeat Democratic Gov. Tony Evers, who would block such a move, in November.

The leading fundraiser among the GOP secretary of state candidates is state Rep. Amy Loudenbeck, who has reported about $94,000 in contributions. The other two Republicans are businessman Jay Schroeder and Justin Schmidtka, who hosts a political podcast. Also on the ballot is Libertarian candidate Neil Harmon.

In Minnesota, the leading Republican candidate for secretary of state, Kim Crockett, has called the 2020 election a “train wreck” and accused state election officials of using the pandemic as “cover to change how we vote, but also how the vote is counted.”

While Crockett does not typically claim in public that the election was stolen from Trump, she has associated with those who do and has campaigned at events with them.

At the state party convention in May, in which Crockett was endorsed by convention delegates, she showed a video depicting billionaire investor and philanthropist George Soros as a puppet master, pulling the strings of Simon, the current secretary of state, and prominent election lawyer Marc Elias, with a caption that said, “Let’s wreck elections forever and ever and ever.”

All three men are Jewish. The GOP state chairman soon apologized, claiming Crockett did not intend for it to be anti-Semitic. Crockett did not apologize, and a day after the chairman’s apology, sent a fundraising letter with the title "Media smears and communist tears” and claiming she was the victim of “contrived and bogus political attacks.”

Races in Connecticut and Vermont have drawn a lot of interest after two longtime Democratic secretaries of state said they would not seek reelection.

Much of the debate in both the Democratic and Republican primaries in Connecticut has centered on voter ID requirements. A voter in Connecticut can sign an affidavit instead of presenting an ID, and there are multiple forms of ID that are accepted, including a bank statement or current utility bill.

Republican candidate Dominic Rapini, who is a former board chairman of a group called Fight Voter Fraud Inc., has called for tightening ID requirements and cleaning the state’s voter rolls. While Rapini says he is suspicious about voter fraud in Connecticut and believes reforms are necessary, he hasn’t echoed Trump’s claim that the 2020 election was stolen.

On the Democratic side, both candidates oppose the GOP proposals on voter ID. State Rep. Stephanie Thomas of Norwalk, who won the party’s endorsement at the state convention this spring, faces Maritza Bond, health director for the city of New Haven.

In Vermont, the Democratic primary has drawn the most attention. For the first time since 2010, Secretary of State Jim Condos, a Democrat, will not be on the ballot after announcing plans to retire.

All three Democratic candidates in Tuesday’s primary promise to continue efforts to make elections in the state as accessible and secure as possible. Last year, the Legislature passed a law that requires general election ballots be mailed to all registered voters, although people can still opt to vote in person on Election Day.

The candidates are Deputy Secretary of State Chris Winters, who has worked in the office for 25 years; state Rep. Sarah Copeland Hanzas, who co-sponsored last year’s voting law; and Montpelier City Clerk John Odum, who has overseen elections in Vermont’s capital city for the past decade.

A perennial candidate for office, H. Brooke Paige, is the lone person running in the GOP primary. He also appears on the ballot for three other statewide offices.