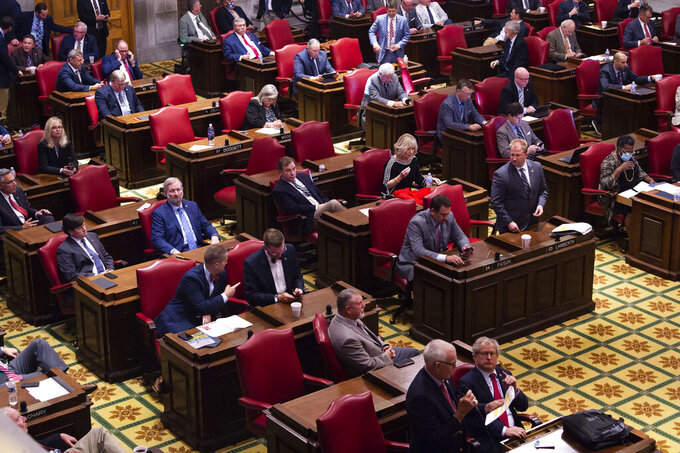 Stephanie Amador, ASSOCIATED PRESS
Tennessee lawmakers gather for a special session of the Tennessee General Assembly to take up incentives for Ford to create an electric vehicle manufacturing campus in West Tennessee, Monday, Oct. 18, 2021, at the State Capitol in Nashville, Tenn. Tennessee lawmakers on Wednesday, Oct. 20, 2021, committed to spending nearly $900 million on state incentives, infrastructure upgrades and more as part of a sweeping plan with Ford Motor Co. to build an electric vehicle and battery plant near Memphis. (Stephanie Amador/The Tennessean via AP)

NASHVILLE, Tenn. (AP) — Tennessee’s GOP-controlled General Assembly has signed off on a number of measures undercutting COVID-19 protections, while also begrudgingly backing off on threats to revoke a business' ability to enforce mask mandates.

Lawmakers approved the slate of bills early Saturday while most Tennesseans were asleep, marking the second time the Legislature has recently advanced significant legislation in the middle of the night.

Democratic lawmakers quickly criticized that their Republican lawmakers were willing to concede to concerns raised by influential businesses lobbyists, but not those pointed out by school and health officials alarmed at other measures that advanced during the three-day special legislative session.

On Friday, Gov. Bill Lee’s office confirmed Ford Motor Co. and other manufacturers had expressed concerns with several of the proposals being discussed during the special session.

Lee had declined lawmakers' requests to call a special session to address the virus, forcing them to collect enough signatures so they can call without the governor. By Saturday, Lee thanked Republicans for taking up certain issues but held off from promising he would sign all of the bills into law.

“We are evaluating each piece of legislation to ensure we push back on harmful federal policies and do right by Tennesseans,” the governor said on Twitter on Saturday afternoon.

Ultimately, lawmakers agreed to carve out various industries from COVID-19 vaccine mandate bans they want to enforce on many others. Exceptions range from many health care facilities and businesses like entertainment venues as long as they require either proof of vaccination or a negative COVID-19 test. Businesses reliant on federal money could also apply to the state to be exempt from the vaccine mandate ban.

“I hope COVID goes away, but it’s probably going to be around for a little bit,” said Senate Majority Leader Jack Johnson. “This is our attempt as a state and state government to do the best we can to put this awful chapter behind us.”

However, government entities — including public schools — would largely be prohibited from implementing mask mandates. Those entities would only be allowed to require masks if they lived in a county with a rolling average 14-day COVID-19 infection rate of at least 1,000 per 100,000 residents — a mark that Tennessee has yet to hit despite its multiple virus surges over the past two years. Under the legislation, private schools could implement mask mandates. Exemptions include state and local jails and airports.

“I’m glad a lot of businesses have spoken small and large...but I wish this went further to protect children,” said Rep. Jason Powell, a Democrat from Nashville.

Ford was particularly in the forefront of the Legislature’s mind after the company announced last month that it plans on creating a $5.6 billion campus to build electric F-Series pickup trucks about 50 miles (80 kilometers) east of Memphis, in rural Haywood County.

The blockbuster announcement was quickly hailed by Lee and other top state leaders as one of the biggest investments in Tennessee history. Within days of the announcement, the Republican governor called a special legislative session so the General Assembly could approve a nearly $900 million incentive package to secure the deal.

Nearly a week after signing off on the economic incentives, Republican lawmakers set their sights on prohibiting a wide range of COVID-19 restrictions, sparking concerns from multiple business groups that such rushed actions could result in struggling business owners enduring costly mitigation as they navigate conflicting state and federal mandates.

Notably, GOP members moved to block President Joe Biden’s COVID-19 vaccine mandates for private employers even though those regulations have yet to be issued.

In passing these measures, Tennessee joined a handful of Republican states that have called special legislative sessions seeking to counter vaccine mandates, mask requirements and more after battling the virus outbreak.

Yet in doing so, Tennessee Republicans put them at odds with the business groups who argued that business owners will now be open to “crippling litigation costs” as they navigate conflicting state and federal mandates.

Labor officials also warned that the federal government could revoke Tennessee’s authority to oversee its own workplace safety enforcement if the state refuses to comply with the U.S. Occupational Safety and Health Administration’s COVID-19 rules. The Biden administration already issued such threats to three Republican-led states earlier this month.

Here’s a look at what also passed during the special session:

— The state’s six independent county health boards — which oversee public health actions in the most populous counties — could not issue their own preventative health orders during a pandemic. Instead, the state health department would be in charge of handing down those decisions.

— School board elections could become partisan under a bill allowing local political parties to choose to nominate school board candidates — thus allowing the candidates to campaign as that party’s nominee. The races are currently nonpartisan.

— Republicans slightly trimmed how long a state of emergency could stay in place under a governor’s executive order from 60 days to 45 days.

— A bill that would allow the Attorney General’s office to petition a court to replace district attorneys who “peremptorily and categorically” refuse to prosecute certain laws. The governor still needs to sign off on the proposal, even though it’s unknown how much of a difference lawmakers might make. Tennessee’s Constitution already says that when a district attorney “fails or refuses to attend and prosecute according to law, the court shall have power to appoint an attorney pro tempore.” Tennessee Republicans have increasingly pointed to Nashville District Attorney Glenn Funk as the reason the bill was needed. Funk has publicly stated he won’t prosecute multiple hot-button policies that target abortion rights, transgender people, mask requirements in schools and small marijuana possession cases.