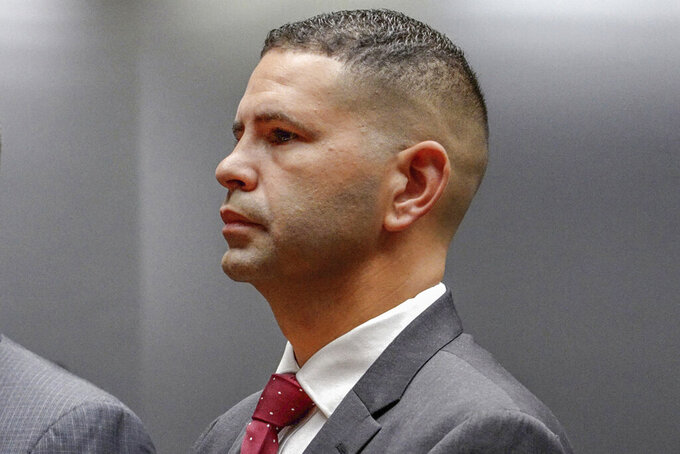 David DelPoio, ASSOCIATED PRESS
FILE - Providence, R.I. police officer Jeann Lugo stands during a court appearance on July 8, 2022, in Providence R.I. Lugo, who was charged with punching a political rival at an abortion rights rally, was acquitted Wednesday, Nov. 16, 2022, of a misdemeanor simple assault charge by a judge who determined that his actions were justified because he was trying to maintain public order. (David DelPoio/Providence Journal via AP, Pool, File)

WARWICK, R.I. (AP) — A Rhode Island police officer charged with punching a political rival at an abortion rights rally was acquitted Wednesday of a misdemeanor simple assault charge by a judge who determined that his actions were justified because he was trying to maintain public order.

The judge at the jury-waived trial determined that Providence Police Patrolman Jeann Lugo acted within his authority as an officer when he punched Jennifer Rourke during the June 24 protest, even though he was off duty at the time. A man was also punched during the chaotic melee that was caught on video.

The protest came in response to the U.S. Supreme Court decision to overturn Roe v. Wade, which had provided a constitutional right to abortion since 1973.

Prosecutors say Lugo, who was a Republican candidate for a state Senate seat at the time, punched Rourke, who was his Democratic opponent. Lugo dropped out of the race the next day. Rourke lost the election to another Republican.

The judge acknowledged that Lugo struck Rourke, but said he did so after Rourke tried to restrain him from trying to intervene in the other altercation.

Lugo, 35, left court without speaking but his attorney spoke on his behalf.

“He never should have been arrested in the first place. It’s the right verdict,” Daniel Griffin said. Griffin said Lugo was “railroaded” and the whole process has “devastated” him.

Black Lives Matter RI PAC in a statement released on behalf of and with permission from Rourke, said she was failed by the justice system.

“To have an officer of the law, sworn to protect the rights of citizens in our community, attack a political figure exercising their right to free speech and public demonstration is a contradiction and stain on the validity of this officer’s employment and the Providence Police Department as a whole," the civil rights organization said.

Lugo was placed on paid suspension by the police department and an internal investigation found that he had violated department rules and regulations governing conduct. Chief Col. Hugh Clements recommended that Lugo lose his job.

A spokesperson said in an email that the police department will continue its efforts to fire Lugo through the state's Law Enforcement Officers' Bill of Rights process. Griffin said Lugo should keep his job.