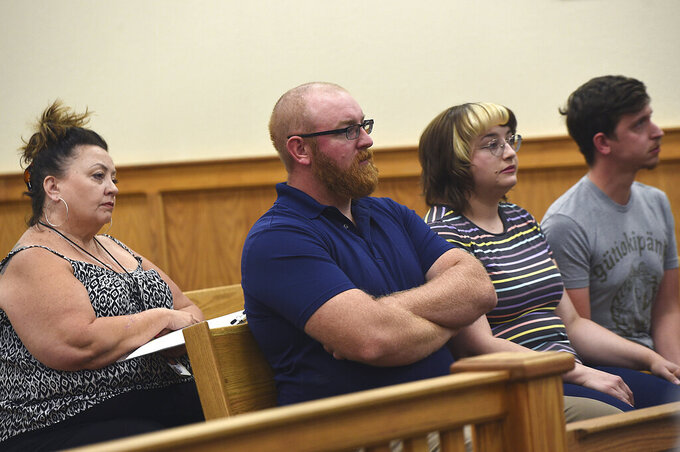 FERNLEY, Nev. (AP) — A rural Nevada judge said Tuesday she won't decide until September whether to proceed toward a trial in Lyon County on all the charges facing a man accused of kidnapping and killing a Fernley teenager in March.

Public defenders for Troy Driver filed a motion last week to dismiss the first-degree murder charge in Lyon County's justice court in Fernley. They argue he can't be tried on that charge in Lyon County because 18-year-old Naomi Irion was killed in neighboring Churchill County.

Lyon County District Attorney Stephen Rye told Justice of the Peace Lori Matheus in court in Fernley on Tuesday he plans to file his formal opposition to the motion next week.

Matheus said she'll give him until July 20. She plans to hear arguments about the venue dispute in mid-September at the same time she scheduled a preliminary hearing on the murder, kidnapping, robbery, burglary and destruction of evidence charges.

That hearing Sept. 13-15 will determine whether there's enough evidence to bound Driver over for trial in Lyon County District Court on some or all of the charges.

Sheriff's deputies acting on a tip found Irion's body March 29 buried in the high desert of Churchill County northeast of Fernley, where they say she was abducted from a Walmart parking lot on March 12.

The evidence-destruction charge stems in part from prosecutors' allegation that Driver bought new tires for his pickup truck and disposed of the old ones after he drove to the remote spot in Churchill County where they say he shot her in the head and buried her in a shallow grave.

Driver is scheduled to appear at the September hearing at the justice court in Fernley in person for the first time since his March arrest on the kidnapping charge.

He made his appearance at Tuesday's status hearing via a video hookup — as he has before — from the Lyon County jail in Yerington where he remains held without bond.

Rye told the judge Tuesday he thought it made the most sense to conduct the preliminary hearing to determine if there's enough evidence to bound Driver over for trial before settling questions about legal jurisdiction.

Public defender Richard Davies said he didn't oppose that sequence at this time.

Driver's lawyers say investigators acknowledged in the criminal complaint that the evidence shows Irion was killed in Churchill County where her body was found.

Prosecutors said in charging Driver, 41, of Fallon, days later that he abducted Irion in Lyon County from a Walmart parking lot in Fernley on March 12 “for the purpose of committing sexual assault and/or purpose of killing her.”

Such an intent would establish jurisdiction for a Lyon County murder trial under the high court’s ruling in the case of Martinez Guzman.

But Driver’s lawyers say prosecutors won’t be able to prove Driver was the kidnapper, and therefore can’t establish he had the intent or committed the necessary “preparatory act” to be tried for murder in Lyon County.