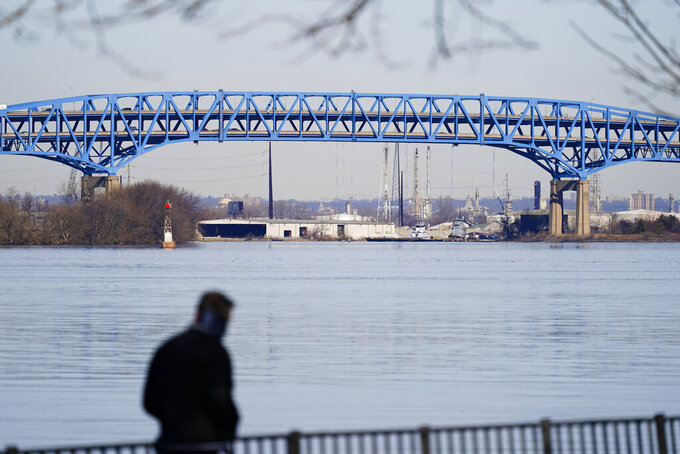 Matt Rourke, ASSOCIATED PRESS
FILE - In this Wednesday, Feb. 24, 2021 file photo, a walker makes their way past the Interstate-95′s mile-long double-decked Girard Point Bridge in Philadelphia. A state court on Thursday, June 30, 2022, permanently blocked Gov. Tom Wolf's plan to toll as many as nine major bridges on interstates in Pennsylvania. The Girard Point Bridge was one of the bridges under consideration for tolling. (AP Photo/Matt Rourke, File)

HARRISBURG, Pa. (AP) — A state court on Thursday permanently blocked Gov. Tom Wolf’s plan to toll as many as nine major bridges on interstates in Pennsylvania, siding with three Pittsburgh-area municipalities that argued that his administration had violated procedures in getting to the advanced stage of considering the idea.

A panel of Commonwealth Court judges granted the municipalities' request to effectively declare the plan dead because Wolf's Department of Transportation had not followed the law.

One key element on which the court agreed with the municipalities is the claim that PennDOT was required to propose specific bridges to toll when it asked the Public-Private Transportation Partnership Board in 2020 for permission to move forward with a bridge-tolling plan.

PennDOT did not, however, identify specific bridges it wanted to toll until months after the board approved a bridge-tolling plan.

As a result, parties potentially affected by a tolling project — such as a municipality — had no opportunity to meaningfully give input to the process before the board's decision, the court said.

Republican lawmakers hailed the decision, while Wolf's administration would not immediately say whether it will appeal it to the state Supreme Court.

A lawyer for the municipalities — Bridgeville Borough, Collier Township and South Fayette Township — said he saw no basis for the administration to appeal, saying that it had tried to get the lawsuit dismissed on a technicality.

The loss for Wolf's administration was the second in a row: A Commonwealth Court judge in a separate case in May had imposed a temporary injunction on the tolling projects.

PennDOT has said that it was holding hearings and giving opportunities for local input on each proposed bridge tolling project.

Wolf’s push for tolling comes as states increasingly look to user fees to make up for declining gas tax revenue that is not keeping up with the demands of fixing highways and bridges.

It also comes amid rising gas prices and spurred opposition from some communities. Wolf could try to start the process over, but he has less than seven months left in office, and neither of his potential successors in November’s election support it.

PennDOT has said the bridge-tolling money is necessary to fund badly needed upgrades at a time when the state’s current highway and bridge budget for construction and maintenance is less than half of the $15 billion that is needed to keep Pennsylvania’s highways and bridges in good condition and ease major traffic bottlenecks.

Wolf, a Democrat, last year called for phasing out the gas tax, and empaneled a commission that produced recommendations to replace the money, leaning heavily on shifting to a vehicle-miles-traveled fee that numerous states are exploring.

In a statement, Wolf's administration said lawmakers have “failed to offer any solutions” beyond passing a 2012 law that created the Public-Private Transportation Partnership Board to help streamline the approval, funding and contracting for major projects.

In recent months, Republican lawmakers have argued that the Wolf administration could instead use federal infrastructure aid or borrow the money from the federal government.

But PennDOT has said neither helps fix a long-term gap of billions of dollars in highway construction and maintenance funding.

Senate Republican leaders insisted Thursday in a statement that they are ready to "discuss how we should fund our road and bridge projects moving forward.”