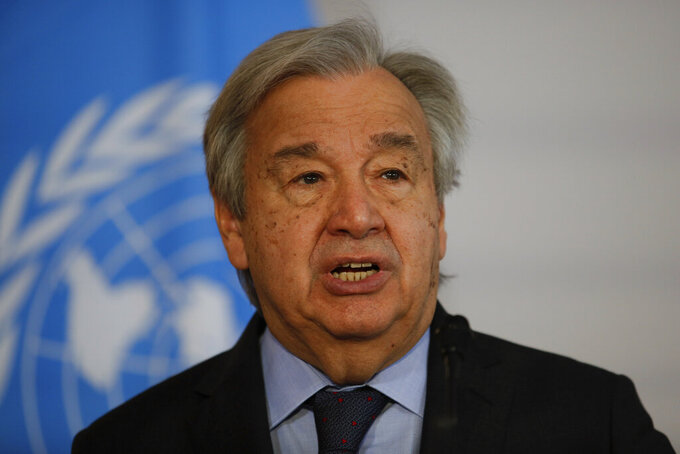 NEWARK, N.J. (AP) — The head of the United Nations implored graduating college students on Tuesday to reject jobs at companies that fund the fossil fuel industry he described as “killing our planet.”

U.N. Secretary-General Antonio Guterres made his remarks to graduating seniors at Seton Hall University in New Jersey. Guterres told the class at Newark’s Prudential Center that they are entering a world “brimming with peril” from conflict and strife and the effects of climate change — but that they can reverse the errors of previous generations by not working for financial institutions that profit off fossil fuels.

“Despite mountains of evidence of looming climate catastrophe, we still see mountains of funding for coal and fossil fuels that are killing our planet,” he said. "That money continues to flow from some of the biggest names in finance, hedge funds and private equity.

“As graduates, you hold the cards,” Guterres continued. "Your talent is in demand from multinational companies and big financial institutions. You will have plenty of opportunities to choose from thanks to the excellence of your graduation. So my message to you is simple: Don’t work for climate-wreckers. Use your talents to drive us towards a renewable future.”

Guterres's remarks came a week after he announced a five-point plan to encourage use of renewable energy around the globe, in the wake of a World Meteorological Organization report that said the last seven years were the seven hottest on record.

“The climate crisis is wreaking havoc, and threatening to erase entire communities and even entire countries — with governments failing to take the action needed to turn this around," Guterres said Tuesday. “My generation — and your parents’ generation — have fallen short in bequeathing the world you deserve. But I have hope that you will succeed where we failed.”