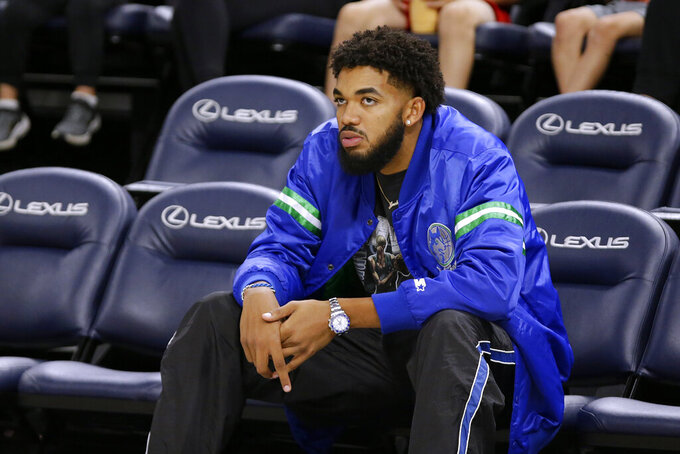 MINNEAPOLIS (AP) — All-Star Karl-Anthony Towns has returned to the court for practice with the Minnesota Timberwolves, after a delayed start to training camp due to an unspecified illness that was serious enough to warrant hospitalization.

Towns took part in non-contact drills with the team on Monday. He will not play in Minnesota's first exhibition game on Tuesday at Miami, coach Chris Finch said.

“He’s in really good shape. He does a really good job. He never really falls out of shape when it comes to his cardio," Finch said. "I think with him, it’s just getting his feel back, some strength back, maybe a little bit of weight back on him. But I would expect he’ll be ready to go within a week. Certainly with a good week of normal training, he should be feeling pretty good.”

Towns declined to divulge many details of his ailment, but he said was just cleared by doctors for walking on Saturday.

“I wasn’t too worried about basketball for a while. But I miss the game. I love the game. I miss these guys. Sick and tired of recovering at the house and not being able to leave and do anything,” said Towns, who's entering his eighth NBA season.

As for being ready in time for the season opener on Oct. 19, Towns said, “Right now, it looks good.”