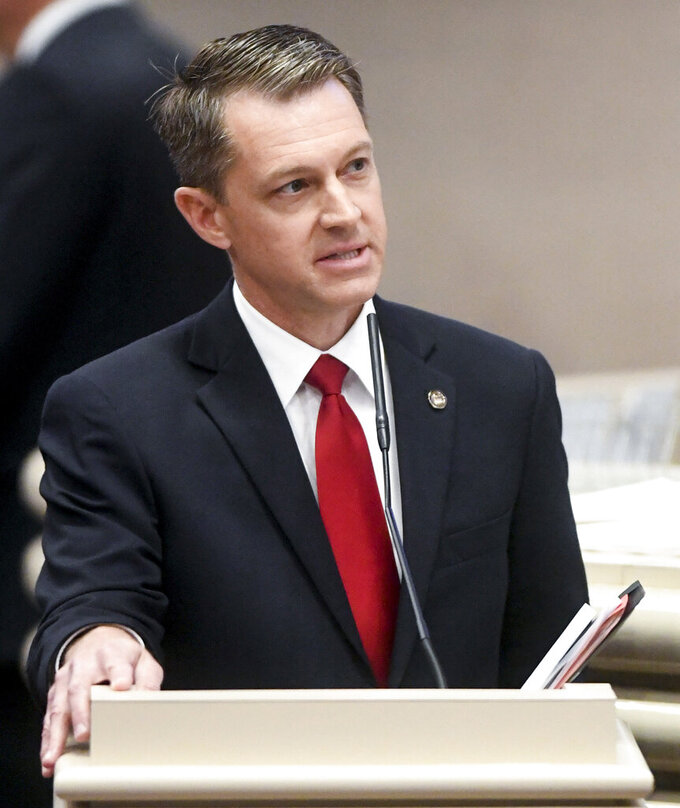 Mickey Welsh, ASSOCIATED PRESS
FILE - Rep. Wes Allen speaks during debate on transgender bills during the legislative session in the house chamber at the Alabama Statehouse in Montgomery, Ala., on April 7, 2022. Allen, who will be sworn in as secretary of state in January, said Wednesday, Nov. 16, 2022, that he sent a letter announcing the state will end its participation in the Electronic Registration Information Center, a non-profit organization comprised of 32 states and the District of Columbia that allows states to share voter registration data. (Mickey Welsh/The Montgomery Advertiser via AP, File)

MONTGOMERY, Ala. (AP) — Alabama will withdraw from a 32-state voter registration partnership, the incoming secretary of state announced on Wednesday, a decision that drew sharp criticism from his outgoing counterpart.

Republican Wes Allen, who will be sworn in as secretary of state in January, said he sent a letter announcing the state will end its participation in the Electronic Registration Information Center, a non-profit organization comprised of 32 states and the District of Columbia, that allows states to share voter registration data. The database was created as a tool to maintain accurate voter rolls and combat fraud by allowing states to know when someone moves, dies or registers elsewhere, but has sometimes become the target of conservative ire and conspiracy theories.

Allen cited privacy concerns as the reason to withdraw. The Republican made a promise during his campaign to withdraw from ERIC.

“I have heard repeatedly as I travelled through the state for the last year and a half that people want us out of ERIC. They don’t want their personal information or the personal information of their children to be sent to this out-of-state group,” Allen said in a statement issued by his campaign. “I promised I would end our participation and that is what I am taking these steps to do.”

Secretary of State John Merrill, also a Republican, issued a statement from his office saying ERIC provides needed information to maintain voter rolls and has identified suspected incidents of voter fraud. He said he is questioning the decision to withdraw.

“Alabama uses ERIC to preserve a clean and accurate voter list. We have not experienced one negative issue because of our relationship with ERIC,” the statement read.

Merrill's office said there has been “dishonest or misinformed” stories spread about the system, including that it is funded by liberal billionaire George Soros. He said states don't have access to other states' voter registration and motorist driver’s license records — or access to the Social Security Administration Death Master Index — but ERIC does, and that it is a crucial tool for maintaining voting rolls.

“So, if Wes Allen plans to remove Alabama from its relationship with ERIC, how does he intend to maintain election security without access to the necessary data, legal authority, or capability to conduct proper voter list maintenance?” Merrill's office said.

The issue of participation in ERIC was raised in at least one other state. The Republican candidate for Arizona secretary of state said during the campaign that he would withdraw from ERIC if elected, but he lost. Louisiana withdrew earlier this year.

Another Republican campaigned on joining the partnership.

Georgia Secretary of State Brad Raffensperger, also a Republican, proudly noted in stump speeches that the state had joined ERIC. Raffensperger in 2019 said it would be a tremendous step forward for the integrity of Georgia’s voter rolls.

Allen said he will send a formal withdrawal letter after he is sworn in on Jan. 16.