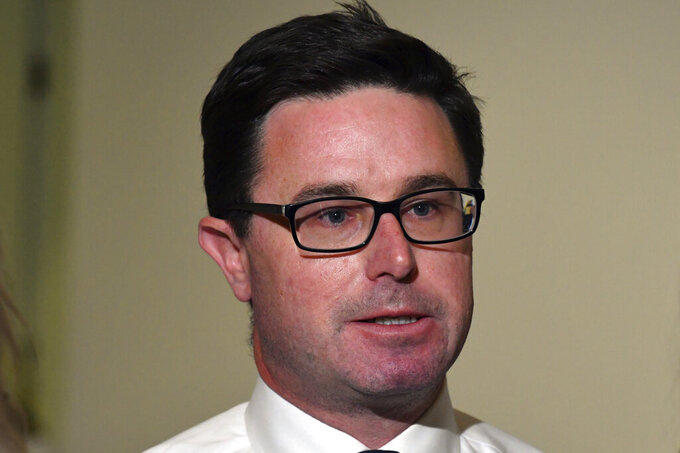 Before entering Parliament, Dutton, 51, worked for a decade as a police officer and is known for his tough stances on immigration and law and order.

He said China's leadership under Xi Jinping was the “biggest issue our country will face in our lifetimes."

“That’s the assessment of the American, British, Japanese, Indians, and it’s our assessment as well. I will support policies which help to defend our country," he said. “I want us to have a productive relationship with China. I want it to be restored, but that is an issue for China."

He vowed to be true to the party’s values and represent Australia’s “forgotten people” in the suburbs and regional areas.

“Make no mistake, and Australians understand this, the next three years under Labor is going to be tough for the Australian people,” Dutton said. “Already they’re breaking promises and foreshadowing policy shifts.”

He said that before the next election “we will have presented a plan to the Australian people which will clean up Labor’s inevitable mess and lay out our own vision.”

Ley, meanwhile, pledged to earn back the trust and faith of female voters who deserted the party in the election.

“My message to the women of Australia is ‘We hear you’,” she said.

“They are incredibly experienced, well versed, deeply, deeply committed Australians to both the Liberal cause and, of course, the cause of the nation and I think they’ll do an outstanding job and I look forward to giving them all of my full support,” Morrison said.

Coalition partner the Nationals also chose a new leader, David Littleproud, a former banker who represents the Queensland district of Maranoa. He was elected in a party meeting on Monday after a three-way contest with former Deputy Prime Minister Barnaby Joyce and Darren Chester.