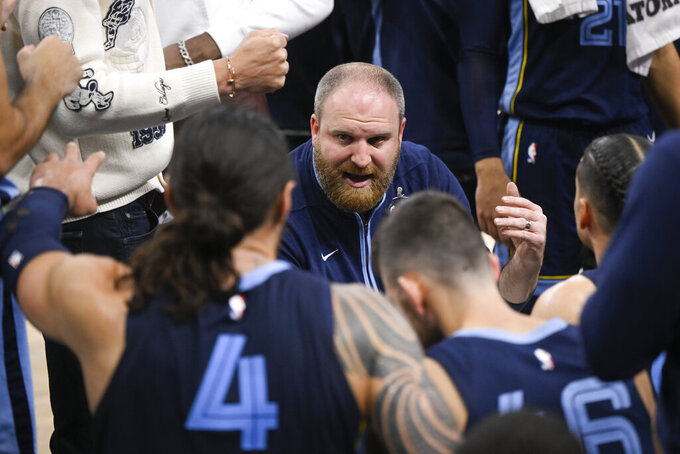 Darren Abate, ASSOCIATED PRESS
Memphis Grizzlies coach Taylor Jenkins talks to players during a timeout in the second half of the team's NBA basketball game against the San Antonio Spurs, Wednesday, Nov. 9, 2022, in San Antonio. The Grizzlies won 124-122 in overtime. (AP Photo/Darren Abate)

“Early in the season for us to have a couple games where we go down the stretch or go into overtime and being able to still come out with a win is big time for us,” Morant said. “We know every game is not going to be a blowout. So, having these reps helps us a lot.”

“Definitely a crazy game overall, not just the finish,” Grizzlies coach Taylor Jenkins said. “Runs from both teams. I said before the game how hard the Spurs play. Tons of credit to Pop (Spurs coach Gregg Popovich) and the group. This was a great challenge for us. We learned a lot.”

Memphis opened overtime on a 9-2 run, but San Antonio nearly stole the game in the final seconds.

Jeremy Sochan scored four points in five seconds, including a dunk off an inbounds steal that pulled the Spurs within 123-122 with 14.3 seconds remaining. After Morant made one of two free throws, Devin Vassell’s 3-pointer hit the side of the rim as overtime ended.

“It felt good. Good play,” Vassell said. “What more can I ask for? Good look. It just doesn’t fall sometimes.”

Vassell and Jakob Poeltl had 22 points each and Keldon Johnson added 16.

There were four lead changes in the final three minutes of regulation.

After San Antonio forced a shot-clock violation on Memphis’ final possession of the fourth quarter, Johnson had a five-foot floater bound and roll on the rim before dropping off.

Morant had 10 points in the first quarter, making both of his 3-point attempts and throwing down a windmill dunk in traffic that awed the crowd.

Memphis would lead by 14 points in the opening quarter before San Antonio had the first of several rallies. There were four lead changes and four ties as the Grizzlies built leads only to have the Spurs respond.

Grizzlies: Former San Antonio G Danny Green received a warm ovation as the Spurs honored him prior to the game as part of their 50th Anniversary celebration. Green has not played for Memphis this season as he recovers from offseason surgery on his left knee.

Spurs: Former San Antonio PG Tony Parker, who was sitting courtside, was honored by the Spurs in the first half with a video of his career highlights. Parker spent all but one of his 18 seasons in San Antonio, guiding the Spurs to four NBA titles. Parker owns France’s ASVEL Basket, the current team of projected No. 1 pick Victor Wembanyama. … C Zach Collins suffered a non-displaced fracture of his left fibula. There is no timetable for his return. Collins suffered a left lower leg contusion Nov. 4 against the Clippers, but an MRI revealed a fracture.

The Spurs have lost five straight in what Popovich has acknowledged is a season of development for his young squad.

While a five-game losing streak is not ideal, Vassell realizes the team and its fans need to be patient as he and others take on new and larger roles.

“Look man, I don’t think we came into the season thinking we were going to be undefeated,” Vassell said. “Win some, you lose some, but at the end of the day as long as we’re competing each and every game and we’re getting better. As you all see, we’re getting better out there right now. We’re 12 games in, who really cares (about a losing streak)? By the time we are 20, 30, 40 games in, we flip the switch.”