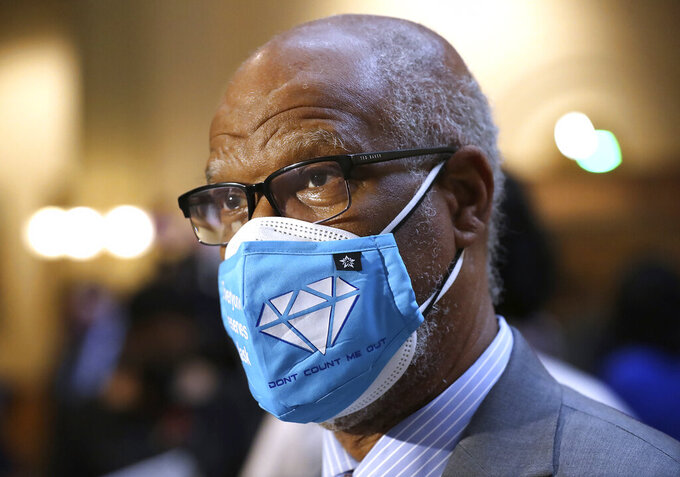 Curtis Compton, ASSOCIATED PRESS
FILE - State Rep. Calvin Smyre, Dean of the House, talks with the media following a press conference by Georgia Gov. Brian Kemp at the Capitol on Tuesday, Feb. 16, 2021, in Atlanta. President Joe Biden on Wednesday, Sept. 22 nominated Smyre, a key Georgia state lawmaker, to become the United States ambassador to the Dominican Republic. He must be confirmed by the Senate before taking his post. Smyre is acclaimed as the longest serving member of the Georgia House. (Curtis Compton/Atlanta Journal-Constitution via AP, File)

State Rep. Calvin Smyre, a Black Democrat from Columbus first elected in 1974, must be confirmed by the Senate before taking his post. Smyre is acclaimed as the longest serving member of the Georgia House and has remained a crucial player in legislative affairs, especially as a go-between in negotiations between Democrats and Republicans.

Smyre, 74, was the youngest member of the House when he was first elected. He became a vice president at of Synovus Financial Corp., a Columbus-based regional bank, before retiring in 2014.

Smyre was the first African American representative named as a floor leader for a Georgia governor when Joe Frank Harris tapped him in 1983. He authored legislation creating the Martin Luther King Jr. state holiday and was a co-sponsor of a bill that removed the Confederate battle emblem from the Georgia state flag. In 2020, Smyre was a co-sponsor of a bill that reinstated a hate crimes law in Georgia, breaking a years-long deadlock after the slaying of Ahmaud Arbery near Brunswick.

He also chaired the House Rules Committee, which controls the flow of legislation in the lower chamber.

Smyre was the first Black chair of the state Democratic Party, the first Black member of the Democratic National Committee from Georgia and a delegate to a number of Democratic conventions. Smyre supported Biden and voted for him as one of Georgia's members of the Electoral College after Biden won the state.

The nomination brought an outpouring of praise from Georgia political figures including a number of Republicans.

“America could not have a better ambassador than Calvin Smyre,” Georgia House Speaker David Ralston, a Republican from Blue Ridge, said in a statement. “Few people have worked longer or harder to move our state and this nation forward. I am proud for my friend and congratulate him on this well-deserved honor. ”