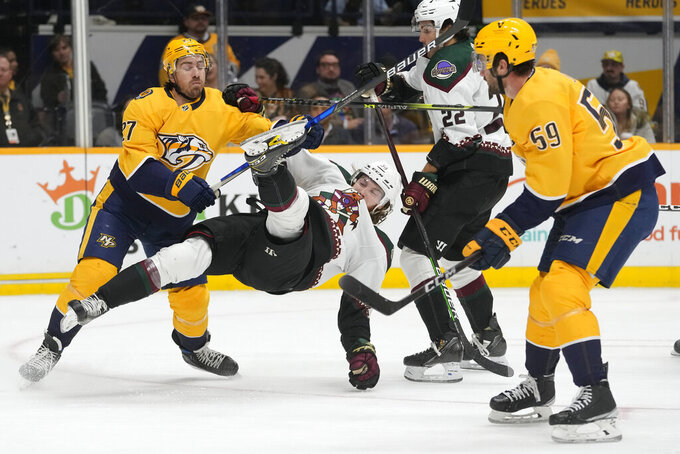 NASHVILLE, Tenn. (AP) — The Nashville Predators feel like they're improving with each game, and that meant finishing off a long homestand with a seven-round shootout.

Cody Glass scored off the right arm of Arizona goalie Connor Ingram, and the Predators held off the Coyotes 4-3 Monday night.

"It was a little bit of nerves, but I’m a confident player and obviously I’ve played with Ingy for the past year,” Glass said of being tapped to shoot. "So I kind of knew what I was going to do and got fortunate enough to kind the change of pace on it, and obviously it went in net.”

Shayne Gostisbehere had a final chance to keep the shootout going. Nashville goalie Juuse Saros made a stick save to finish off the 1,500th regular-season victory for Predators general manager David Poile in his long career.

The Predators wrapped up a five-game homestand going 4-0-1.

Predators forward Matt Duchene was surprised to see the shootout go so long, if only because of how good Saros usually is.

'They did a good job of breaking him down because he’s the best shootout, breakaway goalie that I’ve ever seen," Duchene said. “But he did a great job sticking with it and taking one shot at a time. And our shooters did a great job, too. I haven’t seen too many extra inning shootouts in a while.”

Captain Roman Josi had a power-play goal and an assist, tying it up with a slap shot near the blue line tying it up after Arizona forward Matias Maccelli tripped Alexander Carrier. Colton Sissons dropped the puck to Matt Duchene, who put a wrister over goalie Connor Ingram for a 3-2 lead at 1:31 of the third.

Josi hit the crossbar twice in overtime, the second on the man advantage after Lawson Crouse went to the box for holding. Nashville went 2 of 7 on the power play.

Nick Bjugstad scored twice and had an assist. His second goal came shorthanded with 6:44 left in regulation as he scored over Nashville goalie Juuse Saros’ stickside, tying it at 3. Crouse also had a goal.

Arizona came in rested since a 4-1 loss in Las Vegas on Nov. 17, but the Coyotes now have lost four straight with eight more road games remaining before their next home game.

“You want two points, but we didn’t lose the hockey game,” Coyotes coach Andre Tourigny said. “We lose in the entertainment (portion) of the game. For me, it’s a 3-3 game as far as I’m concerned.”

“He was great,” Tourigny said of Ingram. “He gave us a chance to win. He made some key saves at key moments. Really happy about his performance.”

Once Nick Schmaltz went to the box for elbowing Ryan McDonagh, Granlund put Nashville up 1-0 with his snap shot at 7:04 with his second goal this season on Nashville's third man advantage of the first period.

Crouse tied it at 1 on Arizona's second shot of the second off a nice pass from Bjugstad, and Crouse finished off the rush with a snap shot from just inside the left circle near the slot at 8:49.

Arizona had a chance to take the lead on the man advantage but Maccelli’s shot hit the post with 5:52 left in the second seconds before Dante Fabbro’s tripping penalty expired. Bjugstad pushed the puck past Saros’ outstretched right skate at the post with 4 :04 left in the period for a 2-1 lead.

McDonagh took a puck to the face during the second period and went to the locker room for evaluation. McDonagh was back on the ice to start the third.

Nashville forward Tanner Jeannot appeared to take a stick from teammate Zach Sanford, but he returned to the bench. He took another high stick from Valimaki in the third, which set up Bjugstad's tying shorthanded goal.

Arizona defenseman Josh Brown suffered an upper-body injury and did not play in the third.

The Predators visit Detroit on Wednesday night before returning home for a three-game home stretch.