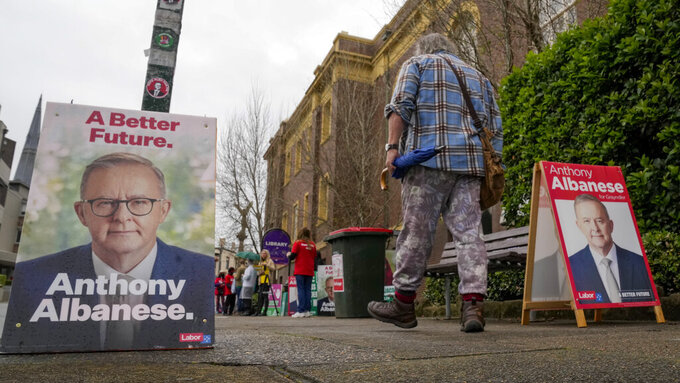 CANBERRA, Australia (AP) — Australia’s center-left opposition Labor Party has outspent the ruling conservative Liberal Party-led coalition in election promises during the six-week campaign leading up to the vote on Saturday.

HOW TO RESPOND TO CHINA?

The Labor Party has promised to establish a Pacific defense school to train neighboring armies in response to China’s potential military presence on the Solomon Islands on Australia's doorstep.

The Australia-Pacific Defense School would deepen institutional links between the Australian Defense Force and its regional counterparts while supporting the region’s needs, the party says.

Labor has condemned a recent security pact between China and the Solomons as Australia’s worst foreign policy failure in the Pacific since World War II.

Solomons Prime Minister Manasseh Sogavare has insisted there will be no Chinese naval base in his country and China has denied seeking a military foothold in the islands. But the pact has rattled Australia and the U.S., and Washington warned it would take unspecified action should the cooperation agreement with China pose a threat to allied interests.

Senior government lawmakers say the timing of the pact during an election campaign is evidence that Beijing was attempting to undermine the ruling coalition’s prospects for reelection. The government maintains that Beijing wants a change of leadership because a Labor administration would be less likely to stand up against Chinese economic coercion.

Prime Minister Scott Morrison declined to confirm or deny the newspaper report because of secrecy surrounding the committee’s deliberations.

The state-owned Australian Broadcasting Corp. would be funded to take more Australian television, radio and online media content to a broader Pacific audience. Partnerships would be built with Pacific broadcasters to carry Australian voices, values and identities to the region to counter Chinese television and radio.

WHAT TO DO WITH HOUSING MARKET?

The Liberal Party and Labor Party have different plans to help Australians buy their first homes in a soaring property market.

The Liberals would allow buyers to access 40% of their retirement funds to a limit of AU$50,000 ($35,100) to buy into a residential real estate market that increased in value by 24% last year.

Most economists say the policy would increase prices further and leave more Australians on government pensions.

Labor would buy a 40% stake in new homes and collect the same share when the house is eventually sold.

Labor argues its policy would not be inflationary because it would only be available to 10,000 home buyers a year. The Liberals say their policy will help more people.

Morrison says his government would exceed its target and might reduce emissions by 30% to 35% by the end of the decade. But the Liberals’ junior coalition partner, The Nationals party, won’t let the government commit to a more ambitious target.

The Labor Party’s most expensive election promise is a AU$5.4 billion ($3.8 billion) commitment to provide cheaper child care for low- and middle-income families.

Child care is the most expensive of Labor's election promises that include better nursing home care for the elderly that would increase Australia’s deficit by AU$7.4 billion ($5.2 billion) over four years.

The Liberal Party says the increased deficit was evidence that Labor were bad economic managers.

The Liberals intend to more than offset their AU$2.3 billion ($1.6 billion) in election promises by cutting public service funding by AU$3.3 billion ($2.3 billion).