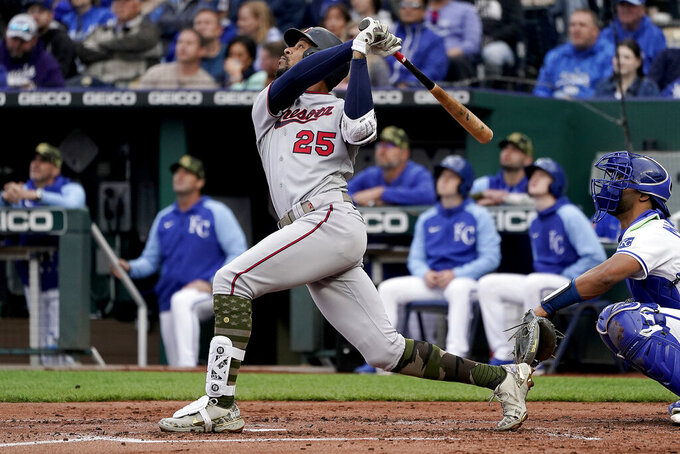 MINNEAPOLIS (AP) — Byron Buxton ran down a fly to right-center at the warning track looking to make the type of tricky catch that's routine for him.

This time, there was a twist.

The ball glanced off Buxton's glove as he leaped to make the grab, allowing Detroit's Spencer Torkelson to record a leadoff double in the sixth inning at Target Field on Monday night.

The voice in the back of Buxton's head on that play was louder than ever.

“The first time I think I got scared of the wall,” he said. “I could tell how skittish I was."

By carefully minimizing the inevitable crash, hitting the padding with both arms and palms up, Buxton did himself and the Minnesota Twins a favor. Major league teams record more than 4,000 outs during the regular season, and sometimes it's more than OK to let one of them go.

“I was mad, but not mad. Mad it hit my glove and I didn’t catch it, but I was positive because I stayed on the field,” Buxton said. “Little wins like that is very positive to me.”

The next night, on another sharply hit ball to right-center, Buxton didn't hold back. He finished a full-on sprint with a fully extended dive to snag Jeimer Candelario's line drive as he skidded on the warning-track dirt.

“You pick and choose your times to turn the jets on and not turn the jets on,” Buxton said. "My teammates made that very, very clear: Make sure I’m smart. I’m doing everything in my power to make sure I stay on the field and be there for them.”

Availability has infamously been Buxton's most elusive ability, having appeared in more than two-thirds of the games in only one of his previous seven major league seasons: 2017.

After signing him to an incentive-heavy contract worth $100 million over seven years, the Twins are trying to manage his playing time during the lower-pressure first half of the schedule so he doesn't have to miss any critical games down the stretch and in the postseason.

According to Sportradar data entering Thursday, the Twins have a .562 winning percentage when Buxton plays and are at just .448 when he doesn't dating back to the start of 2015.

Buxton is working through soreness in his right knee that kept him out for five consecutive days last month, but he has so far avoided landing on the injured list. To ensure he stays on the active roster, he's been getting roughly one day off per series for now until the time is right to ramp up.

“I think he’s doing fine. He would love to get a few more hits in the last few days, but I think he’s ultimately going to be in a good spot,” manager Rocco Baldelli said Wednesday after Buxton's hitless streak stretched reached 26 straight at-bats.

Buxton, speaking after the Twins had their six-game losing streak stopped in an extra-inning loss to Detroit, declined to answer a question about whether the condition of his knee has been improving.

What was clear, though, was his reluctance to go on the injured list even if it might provide a short-term boost.

Even with 14 games missed and mired his recent slump, Buxton entered Thursday tied for sixth in the majors with 11 home runs.

“I ain’t figured it out yet. Just keep putting good swings on the ball," he said. "Eventually they’re going to start falling.”