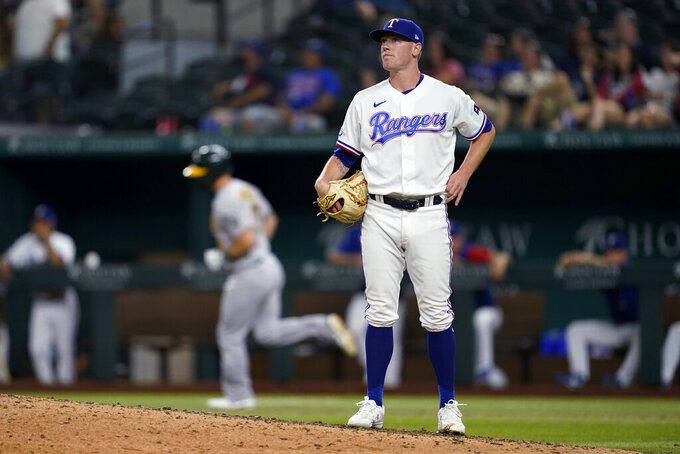 Pinder was Texas' automatic runner to open the 12th and scored on Vimael Machin's sacrifice fly off Dennis Santana (3-4). Three more runs scored before Pinder came to bat with the bases loaded, and he hit the first pitch from Kolby Allard into the left-field seats to make it 14-6.

Dermis Garcia had an RBI double during the inning for his first major league hit. Ramon Laureano also had an RBI single, and Elvis Andrus drew a bases-loaded walk.

Seager homered for a career-high fifth straight game in the ninth inning to trim Oakland's lead to 5-4, and Kole Calhoun tied it with a single a few batters later. The homer was Seager's 21st.

Marcus Semien also homered for Texas and had three RBIs, including a tying double in the 10th.

“We didn't play very well but we stayed in the game,” Woodward said.

Murphy had four hits for Oakland, the last a single that scored Machin in the top of the 10th.

Kirby Snead (1-0) struck out two and stranded two after entering during the 11th inning.

“That was huge for him,” Murphy said. “I can't say enough about the job he did tonight.”

Oakland had led from the fifth inning, when a botched play at home plate resulted in two of the A's three runs and a 4-3 lead.

Texas starter Glenn Otto fielded a grounder near the mound with one out and runners on first and third. Otto first looked to first base, then threw home past catcher Sam Huff.

“We had some mental mistakes that cost us,” Woodward said.

The Rangers had an auspicious start, with Josh Smith leading off with a double and Semien crushing a 416-foot home run to left-center field against James Kaprielian and Semien's former teammates for a 2-0 lead in the first inning.

“I just made a bad pitch to Semien,” Kaprielian said. “I'm a starting pitcher. I know my job is to get to the next pitch."

Semien, who hit a career-best 45 home runs in 162 games for Toronto last season, signed a seven-year contract as a free agent in January to play for Texas. He did not homer in his first 43 games this season but has slammed 12 in his 41 games since — an even more productive pace than he maintained in 2021.

Athletics: RHP Frankie Montas, who's missing a start because of shoulder inflammation, threw in the bullpen before Tuesday's game. “The bullpen went well,” manager Mark Kotsay said. "I'm not going to name a date but hopefully he'll be ready in the weekend.

Rangers: No new injuries to report.

WHO’S ON THE MOUND?

The A’s haven’t announced starting pitchers for games in Houston on Friday and Saturday, but there could be at least one starter who just rejoined the team. Before Tuesday’s game, Oakland optioned Monday’s starter, RHP Adrian Martinez, to Triple-A Las Vegas and designated RHP Jacob Lemoine for assignment.

The replacements are LHP Jared Koenig, who had been at Las Vegas after making four starts for the A’s in June, and RHP David McKay, joining his fifth major league team after being claimed on waivers from Tampa Bay. Kotsay said, “Koenig will be in the bullpen (Tuesday) night, and he may be in line for a start this weekend."

That seems more likely after the A's paraded eight pitchers to the mound Tuesday.