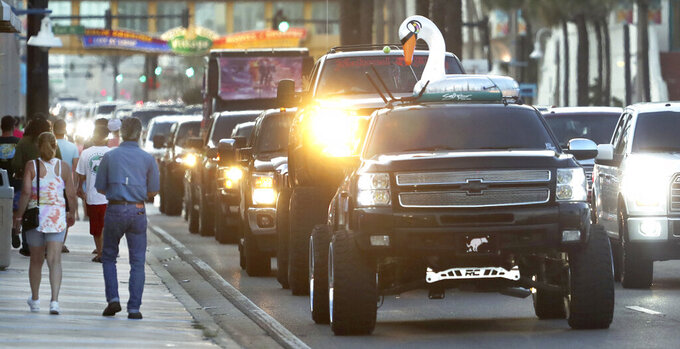 DAYTONA BEACH, Fla. (AP) — Still reeling from the mayhem generated by the invasion of the chaotic Daytona Truck Meet in June, the Halifax Area Advertising Authority board of directors on Wednesday took a step toward defining a better long-term vision of the World’s Most Famous Beach as a tourist destination.

The tourism board, which oversees and funds the Daytona Beach Area Convention & Visitors Bureau, directed CVB staff to research consultants that might be able to help distance Daytona Beach from its lingering reputation as a home for such disruptive events.

The negative impact of the Truck Meet is undercutting significant gains that the Daytona Beach area has made in average daily room rates commanded by a growing list of newer, upscale properties such as the Hard Rock Hotel and others, board members said.

”We need some sort of effort to elevate our customer base,” said board member Samir Naran, chief operating officer of Ormond Beach-based Premier Resorts & Management, alluding to the Truck Meet. “I don’t think we got good business out of it, and we got a lot of negativity out there from it.”

Tuesday’s discussion was a continuation of dialogue that dominated the HAAA board’s June budget workshop, held only days after the truck event that attracted some 50,000 rowdy monster-truck fans that turned the city upside down.

In the aftermath of the event, hoteliers shared stories of noise, disrespectful behavior and even property damage by Truck Show visitors, actions that inspired other guests to state that they would never return.

Daytona Beach Police Chief Jakari Young also offered the Daytona Beach City Commission a blunt assessment of how the event overtook the city, as 300 police officers, some working 16-hour shifts, attempted to handle the unruly crowds on the beachside.

That effort resulted in an officer overtime pay bill of $174,000 to respond to incidents that included one bomb threat, one broad daylight road rage shooting and a crush of pickup trucks and people who treated Daytona Beach like an open-air toilet and trash can.

The strong sentiment indicates that the time is right to redefine Daytona Beach’s image in the eyes of potential visitors, said board member Rob Burnetti, general manager of the 212-room Shores Resort & Spa in Daytona Beach Shores.

“It really is compelling when you start hearing leaders in the market say that some of these events don’t make sense for us anymore,” Burnetti said. “We need to have a strategic plan about what this market wants to be five or 10 years down the road. I think now’s the time.”

Lori Campbell Baker, CVB executive director, said that the bureau’s staff would start putting together recommendations that could be ready to present to the HAAA board at its next scheduled meeting on Sept. 15 or possibly at a workshop session that could be scheduled in August.

Burnetti and Board Chairman Jim Berkley, general manager of the 744-room Hilton Daytona Beach Oceanfront Resort, both suggested that the search focus on companies outside the market.

“There might be things that none of us can see like someone would from the outside,” Berkley said.

In other business, the board unanimously approved its proposed budget for the fiscal year that begins on Oct. 1.

The budget includes proposed expenses of $4,960,800 for advertising. That’s a 30% increase over the current fiscal year’s budget of $3,805,000, a figure that was trimmed back a year ago as the pandemic made its impact on tourism worldwide.

The budget is slated to go to the Volusia County Council for approval on Aug. 17.