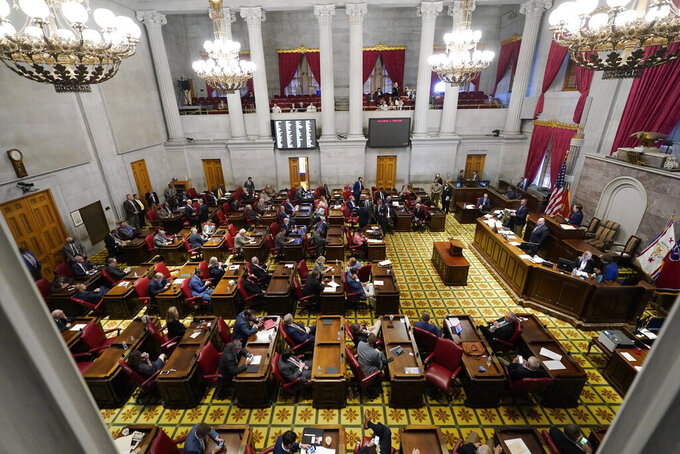 NASHVILLE, Tenn. (AP) — Tennessee schools will have to jump through even more hoops if they want to implement mask mandates to prevent the spread of COVID-19 under legislation recently approved by the state’s GOP-controlled General Assembly.

The strict new rules are part of a sweeping bill Republicans signed off on in the middle of the night over the weekend as they worked to undermine numerous COVID-19 protective measures.

Lawmakers were willing to back down on measures targeting private businesses after industry groups balked at mask requirement restrictions. The business groups were left with some provisions they oppose — conflicting state and federal mandates on vaccines, the threat of lawsuits to enforce the new law, and the fear that the U.S. government could take over workplace safety regulation in Tennessee because of attempts to undermine federal safety rules.

When advocates for public schools asked for similar leniency on mask wearing, lawmakers brushed off their pleas that mask mandates were necessary to protect children and teachers amid the virus outbreak and kept strict limits in the bill. At the same time, private schools were given an exemption so they could require masks.

Tennessee is already facing federal scrutiny for how it's handled the issue of masks in schools. Gov. Bill Lee issued an order allowing parents to opt their children out of mask mandates. Three judges have since blocked the order from applying in three counties, one in each federal court district in the state. And Tennessee is among the five states under U.S. Education Department civil rights investigations because they have banned or limited mask requirements in schools. The department says the policies could amount to discrimination against students with disabilities or health conditions.

The legislation now goes before the Republican governor, who has held off on promising he'll give the bill his signature. He's also yet to veto a bill during his first term in office.

Under the proposal, government entities — including public schools — would largely be prohibited from implementing mask mandates. Those entities would only be allowed to require masks if they lived in a county with a rolling average 14-day COVID-19 infection rate of at least 1,000 per 100,000 resident while the state is under a state of emergency. The state currently is far below that threshold.

Yet even then, mask mandates would continue to be limited in use. The school's principal would have to request the mandate to the school board. If approved by the board, the mandate could only apply to that particular school — not the whole school district — up to 14 days.

As of Monday, school officials in Nashville said they were reviewing the slate of bills passed during the three-day special legislative session as they waited to see if Lee would sign them into law.

Spokesperson Sean Braisted said the district is committed to putting “student and staff safety first, while complying with all lawful requirements.”

“We will communicate any new procedures to families and staff as quickly as possible,” he said.

Yet government entities and businesses could sidestep both the vaccine and mask mandate bans if they reach out to the state's comptroller's office and show they would lose federal funding by complying with the state law.

State Comptroller Jason Mumpower would have to set the guidelines on qualifying for an exemption. As of Monday, a spokesperson for the office said officials were having “preliminary discussions” on what staff and resources might be needed to handle the potentially large swath of requests from schools and businesses.