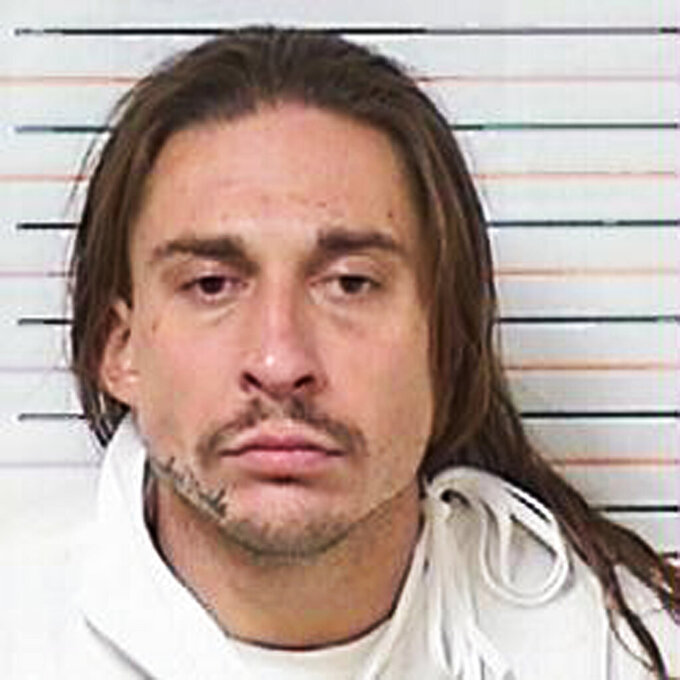 Uncredited, ASSOCIATED PRESS
This undated photo provided by the Missouri Department of Corrections shows Cody L. Harrison. Authorities say a Missouri police officer who was still in training after graduating from the police academy in July has died after being shot by a wanted man who opened fire on officers and was also killed. The highway patrol says the man who fired at the officers, later identified as 33-year-old Cody L. Harrison, of Gladstone, was pronounced dead at the scene. (Missouri Department of Corrections via AP) 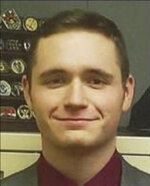 A Missouri officer who graduated from the police academy two months ago was shot and killed by a man being sought on burglary and theft charges, authorities said. The suspect also died in a shootout with officers.

The Missouri State Highway Patrol said two officers went to a residence in Independence about 11:30 a.m. in response to a call to dispatch and were met by a man who fired a handgun at the officers.

Madrid-Evans was shot and the other officer returned fire, police said. The man who fired at the officers, later identified by the highway patrol as Cody L. Harrison, 33, of Gladstone, was pronounced dead at the scene.

Patrol Sgt. Andrew Bell said Wednesday that officers had received a tip that someone was wanted when they responded. An absconder warrant was issued for Harrison on Tuesday, said Karen Pojmann, a spokeswoman for the Missouri Department of Corrections.

Court records show he was sentenced to 15 years in prison after pleading guilty in 2011 to firing at a motor vehicle. The victim in that case told police that gunfire erupted as he was driving his pickup truck. Police found bullet holes in the truck's windshield, as well as the rear window, a tire and the driver’s side mirror, according to the probable cause statement.

One witness told police that Harrison said that he had “shot at someone” because the victim was continuously driving by the home where Harrison was living.

Harrison was released in July 2018 but then returned to prison in November 2020 after committing a parole violation, Pojmann said.

She said he was released on parole again on May 24 but was facing reincarceration after he was charged with burglary and stealing. Those charges, which were pending, stem from allegations that he stole items including cash from his former boss in the Kansas City suburb of Grain Valley the previous year while Harrison was free on parole.

The Jackson County prosecutor’s office said in a statement that the office had requested that Harrison be held on $10,000 bond in the case, but the court ordered that he be released on his own recognizance. At issue was a 2019 Missouri Supreme Court ruling limiting when judges can impose bail, a move that was aimed at reducing court costs that can derail the lives of low-income defendants.

Prosecutors sought an arrest warrant after he didn’t appear for a hearing in late August, leading him to be deemed an absconder. The prosecutor’s office also said it was reviewing a case that police had submitted accusing Harrison of carrying a firearm despite being a convicted felon.

Harrison also had a past convictions for marijuana possession and tampering with a motor vehicle, court records show.

Patrol Sgt. Bill Lowe said early Thursday that the investigation was ongoing and he had no other information to release.

Madrid-Evans began his career with the department at the Kansas City Regional Police Academy in January and graduated in July. He had entered the department’s Field Training Officer program, the department said.

“It is pretty somber right now, just kind of a state of shock really," Taylor said Thursday. “Just trying to process what happened yesterday and figure out what the next steps are."

He said the last time the department lost an officer in the line of duty was in 2001, when Terry Foster was killed at the scene of a domestic disturbance. Foster, who was just weeks away from retiring, was shot four times by a man police believe died in a subsequent fire that he started.

In a statement, Independence Mayor Eileen Weir thanked officers and other first responders for their service.

“We are ever hopeful that their daily interactions with the public will be peaceful so that they might return home to their families safely at the end of their shift. Today, that was not the case,” the statement said.

“If there was ever a time to stand up for law enforcement, now is the time. They remain the front-line response for Missourians, and we must support them and give them the respect they deserve,” Parson said.