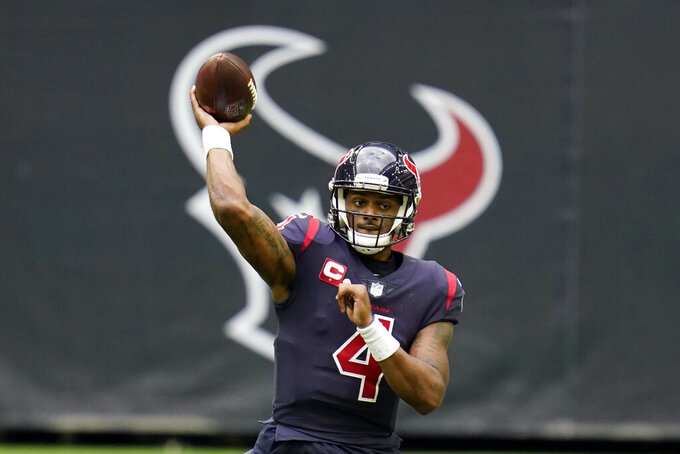 Matt Patterson, ASSOCIATED PRESS
FILE - In this Dec. 27, 2020, file photo, Houston Texans quarterback Deshaun Watson throws a pass during an NFL football game against the Cincinnati Bengals in Houston. One of the 22 women who have filed lawsuits accusing Watson of sexual assault and harassment has dropped her case, citing privacy and security concerns after some of the women were ordered to make their names public following court hearings recently. In court documents filed late Tuesday, April 13, 2021, the woman's attorney, Tony Buzbee, said she "reserves the right to refile the case once such concerns are addressed." (AP Photo/Matt Patterson, File)

HOUSTON (AP) — An attorney for Houston Texans quarterback Deshaun Watson on Monday accused the 22 women who have filed lawsuits alleging they were sexually assaulted or harassed by the NFL player during massages of lying, claiming their assertions are based on “an avalanche of false accusations.”

The statement by Watson’s attorney, Rusty Hardin, comes after the NFL player’s legal team filed in court its initial response to the lawsuits, alleging that eight of the women bragged about giving him massages and five “wanted to get money out of Mr. Watson.”

Tony Buzbee, the attorney for the 22 women, called the claims in the initial response by Watson’s legal team “weak and vague allegations” that are “demonstrably false.”

“As fully anticipated... Deshaun Watson’s only defense is to call these brave women liars,” Buzbee said in a statement Monday.

The 22 women accuse Watson of exposing himself, touching them with his penis or kissing them against their will while he got a massage. At least one woman has alleged Watson forced her to perform oral sex. All of the women are either licensed massage therapists or worked in a spa or similar business. The first alleged assault took place in March 2020, with the most recent one alleged to have taken place last month.

A 23rd woman had also filed a lawsuit but withdrew it after some of the women were ordered earlier this month to make their names public following court hearings. All 22 women who have active lawsuits have since refiled their cases with their names.

Hardin has said it was important that the women be identified so Watson can properly defend himself.

“In the few days since his accusers’ names have been revealed, as was required by Texas law, we are discovering an avalanche of false accusations," Hardin said Monday.

Hardin has said “some sexual activity” happened in some of the massages but that Watson never coerced any of the women.

In their seven-page court filing Monday, Watson’s legal team alleged the woman’s claims were false, saying seven of the women willingly worked or offered to work with Watson after the alleged incidents; three “lied about their alleged trauma and resulting harm;” and five women have “scrubbed or entirely deleted their social media accounts.”

Watson’s legal team called the lawsuits a “money grab.” Hardin had previously alleged the lawsuits were filed following a failed attempt to blackmail his client for $30,000.

“Mr. Watson has been adamant that he did not engage in any improper conduct and we strongly believe him. Therefore, the answer to the question of whether we are saying that all 22 plaintiffs are lying about the allegations of sexual misconduct by Mr. Watson is a resounding yes,” Hardin said.

Buzbee said that none of the women consented to anything that happened to them.

Houston police and the NFL have said they are investigating the allegations, and Nike has suspended its endorsement contract with Watson.

Watson led the NFL in yards passing last season. He signed a four-year, $156 million contract extension with the Texans last offseason, but he became unhappy with the direction of the team as Houston sunk to 4-12. Watson requested a trade in January.