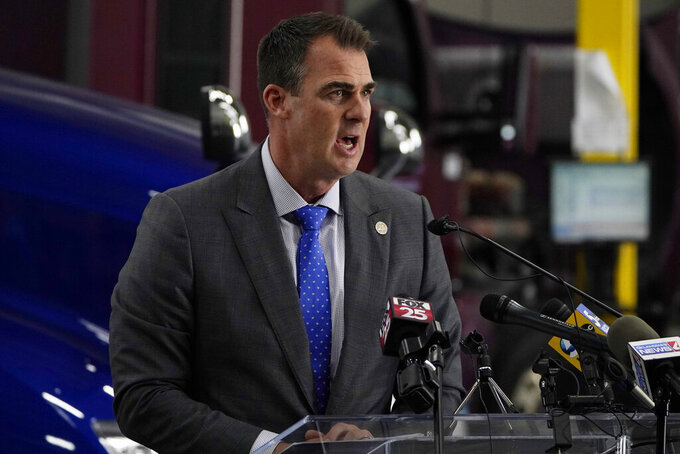 OKLAHOMA CITY (AP) — Oklahoma Gov. Kevin Stitt said Tuesday that he will not decide whether to spare Julius Jones from a lethal injection until after Jones has a clemency hearing before the state Pardons and Parole Board.

The board already had recommended that Stitt commute Jones’ death sentence to life imprisonment. The case drew national attention after being featured in 2018 on the ABC television documentary series “The Last Defense.”

In a Tuesday statement, though, the Republican governor said a clemency hearing, not a commutation hearing, would be the appropriate forum for death row cases.

“Clemency hearings are more intensive and thorough than a commutation hearing and include the option for the inmate to speak publicly before the Pardon and Parole Board, as well as the victim’s family and attorneys from both sides," Stitt said. "The precedent in Oklahoma is for death row inmates to receive the clemency hearings to which they are entitled prior to their execution date.”

Jones’ attorney did not immediately return a message seeking comment.

State law requires clemency hearings at least 21 days before a scheduled execution date. Jones is scheduled to die on Nov. 18.

The case has drawn the attention of reality television star Kim Kardashian West and numerous professional athletes with ties to Oklahoma, who have appealed for clemency.

Jones, 41, has consistently maintained that he is innocent of the killing and alleged that he was framed by the actual killer, a high school friend and former co-defendant who was a key witness against him.

District Attorney David Prater of Oklahoma County, where the killing occurred, and Oklahoma’s former attorney general, Mike Hunter, have said the evidence against Jones is overwhelming.