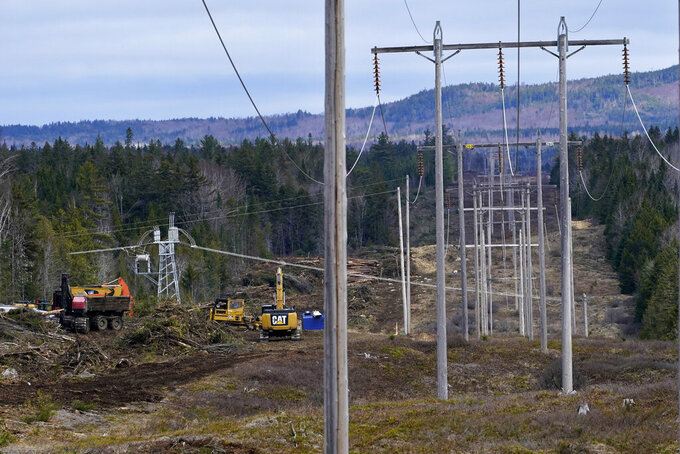 Robert F. Bukaty, ASSOCIATED PRESS
FILE - Heavy machinery is used to clear an existing Central Maine Power electricity corridor that has been widened to make way for new utility poles, April 26, 2021, near Bingham, Maine. Voters rejected a $1 billion transmission line but that is not the end of the polarizing project in the woods of western Maine. (AP Photo/Robert F. Bukaty, File)

Commissioner Melanie Loyzim will close comments at the end of a new public hearing on Nov. 22 so she can expedite a decision.

The Natural Resources Council of Maine told the commissioner that the permit should be revoked immediately to prevent further environmental damage during construction, which is continuing.

It would be a “dereliction of duty” for regulators to allow “continued destruction" of woodlands while waiting for the law to go into effect, James Kilbreth, a lawyer for NRCM, wrote Thursday in a notice to environmental regulators.

The 145-mile (233-kilometer) power transmission line would serve as a conduit for up to 1,200 megawatts of Canadian hydropower. Most of it would be built along existing corridors but a new 53-mile (85-kilometer) section is being cut through the woods to reach the Canadian border.

Utilities companies, some supporting and some opposing the project, poured more than $90 million into the electoral battle, making it the most expensive referendum campaign in state history.

Multiple state and federal agencies already gave their approval to the project, but the state's Department of Environmental Protection is reconsidering after a judge ruled that leases on a 1-mile section of state land were improperly granted. That ruling is being challenged in the state Supreme Court.

Meanwhile, Central Maine Power's parent company is also suing over the referendum, saying it was unconstitutional.

In her letter, Loyzim said the referendum represents another matter to be considered along with the state leases.

“I have determined that the referendum result, if certified such that it will become law, represents an additional change in circumstance that may require suspension of the NECEC order,” she said.