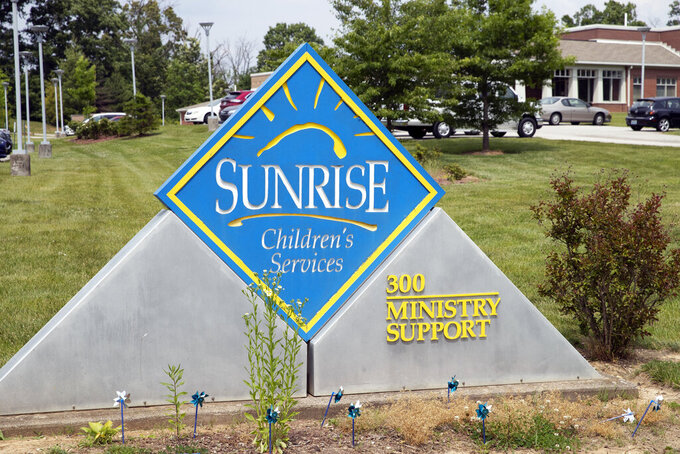 The agreement continues the state's long relationship with Sunrise Children’s Services, which provides foster care, residential and therapeutic services to children and families. It serves some of the most vulnerable children in a state with consistently some of the nation’s worst child abuse rates.

Those contractual ties had been jeopardized by a cultural clash pitting religious beliefs against gay rights. But on Thursday, the state Cabinet for Health and Family Services said in an email it entered into the new one-year contract agreement to continue placing children with Sunrise.

Sunrise’s attorney, John Sheller, said the agreement includes language protecting his client's “sincerely held religious beliefs.” It reflects what Sunrise had requested, he said, adding the agency “is grateful that the commonwealth has decided to follow the law” after prolonged uncertainty.

Sunrise officials say the disputed nondiscrimination language would have compelled them to violate deeply held religious principles by sponsoring same-sex couples as foster parents. Sunrise is affiliated with the Kentucky Baptist Convention, consisting of nearly 2,400 churches. That faith views homosexuality as a sin.

Responding to the state's decision to keep contracting with Sunrise, gay rights advocate Chris Hartman said: “It’s disappointing and disheartening that they would allow this discrimination to continue.” Hartman is executive director of the Louisville-based Fairness Campaign.

In the Pennsylvania case, the high court sided with a Catholic foster care agency that said its religious views prevented it from working with same-sex couples as foster parents.

Sheller had said the high court ruling applied fully to the Sunrise dispute, and warned if Kentucky failed to follow it, the state would "invite litigation which the governor is sure to lose.”

Hartman on Thursday disputed that the Supreme Court ruling had a direction application, and said gay rights advocates will keep pushing for the nondiscrimination language in state contracts.

“We’re going to continue conversations and continue advocating for no discrimination in any state-contracted services with anyone for any reason," he said in a phone interview. "We don’t believe that state dollars should be utilized in the efforts of discrimination.”

Kentucky officials said Thursday that Sunrise agreed to refer any “service applicants who identify as LGBTQ to another provider in good standing” with the state's health and family services cabinet.

Sheller previously said that Sunrise already offers to help steer same-sex couples to other child services agencies that are a “better fit.” Sheller has said that Sunrise “willingly and gladly” accepts LGBTQ youths and does not put children in conversion therapy, which tries to change a person’s sexual orientation or gender identity.

Like many other states, Kentucky contracts with private agencies like Sunrise for some of its child welfare services. Beshear’s administration had set a June 30 deadline for Sunrise to sign a new contract, threatening to stop placing children with the agency if it refused. But the governor said recently that children were still being placed with Sunrise.

Sunrise traces its roots to caring for Civil War orphans. It has contracted with the state of Kentucky for more than 50 years.

“Sunrise has been a place of refuge for hurting children since 1869, we are proud that we will now be able to continue to serve as needed,” Sunrise President Dale Suttles said Thursday. “We are ready to move forward and to be part of the solution in a dynamic way.”

Responding to Sunrise's new contract, Cameron said: "I’m glad to see the Beshear administration follow the law and do what governors of both parties have done for decades — work with Sunrise so that the organization can continue the important work of serving Kentucky’s children.”