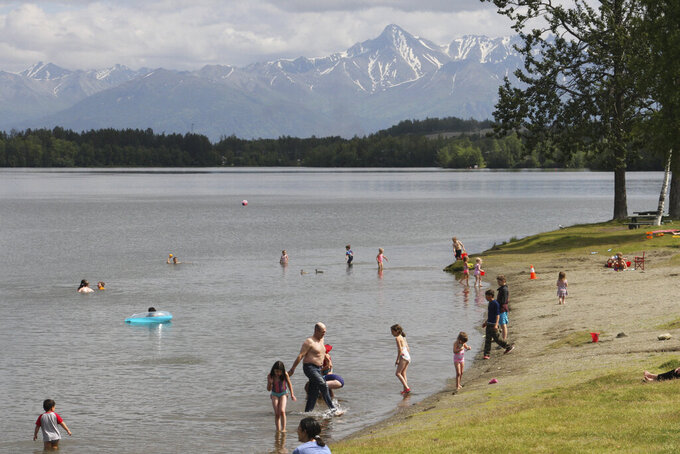 JUNEAU, Alaska (AP) — A fast-growing area north of Anchorage known as a hotbed of conservatism gained the most population since the 2010 Census and will keep the same number of seats in the Alaska Legislature under a new map of state political boundaries that some critics say short-changes the area.

It's not the only criticism of the plan approved by a divided state Redistricting Board, and court challenges are expected. Among the criticisms: House district pairings for Senate seats for the Anchorage and Eagle River areas that board member Nicole Borromeo said would open the board to “an unfortunate and very easily winnable argument of partisan gerrymandering.”

Census data showed the Matanuska-Susitna Borough, which is about the size of West Virginia and includes Palmer and former Gov. Sarah Palin's hometown of Wasilla north of Anchorage, had 18,086 more people last year than in 2010, the biggest jump for any borough or Census area in Alaska. The region also was the second most populous overall in the state, with an estimated 107,081 people, behind Anchorage, with 291,247, according to Census data.

While the region would have the same number of seats, new House maps would place two Wasilla incumbents in the same district.

Republican Rep. Christopher Kurka, who under the redistricting plan would be in the same district as fellow conservative Rep. David Eastman, on social media said the Matanuska-Susitna region is “getting Cheated, Shortchanged, and Hosed.”

The board's target population for each House district was 18,335. Kurka indicated the board could have considered drawing six borough districts under the population target but instead drew population from other areas, including Valdez. Districts in the Matanuska-Susitna region had among the greatest deviations, where the target population is exceeded the most.

“Under this map the Mat-Su will be the most under-represented region of the state, even though (it) has grown more than any other over the past decade,” Kurka said on social media.

Under the maps approved after the 2010 Census, the region has had four full House districts and two that are shared with other areas, including with Valdez. Officials with the Matanuska-Susitna Borough and Valdez, more than a four-hour drive from Palmer, unsuccessfully lobbied during the redistricting process against a shared district this go-round.

The borough, which as part of this redistricting cycle proposed four full and two shared House districts, also recommended a shared district with the Denali Borough. The new maps include a pairing that extends into the Denali Borough.

The borough Assembly meeting agenda for Tuesday includes an item listed as potential litigation regarding the redistricting plan.

Senate Majority Leader Shelley Hughes, a Palmer Republican, said the board had a hard job and can't please everyone. But she said allowances should have been made for continued growth in the region over the next decade. House districts get paired to create Senate districts.

Peter Torkelson, the board's executive director, said the board is required to use the “snapshot” the Census data provides and cannot factor in future projections or trends.

Senate Minority Leader Tom Begich, an Anchorage Democrat, said he thought the House map was fair. He took issue with the board's decision to split the conservative Eagle River area into two Senate districts and pair Eagle River with other parts of Anchorage.

He said he believed the goal “was to take areas that were heavily Republican within the Municipality of Anchorage and use them to try to water down what has become a very progressive city.” Eagle River falls within the municipality but is separated from the city by a mountain range.

During board discussions, member Bethany Marcum argued there were ties between the districts that justified the pairings.

Borromeo, who cited constitutional concerns in opposing the plan, said at the board's final meeting last week that she prays that litigation "is swift and just.”

Board Chair John Binkley said he thought all board members tried to put together a fair and reasonable plan, “but sometimes those are in the eyes of the beholder.” He, Marcum and Budd Simpson supported the overall plan. They were appointed to the board last year by Republicans.

Edgmon, who has followed redistricting since 1990, said he thought the board “did probably about as good a job as can be expected" in drawing House districts, given the constitutional requirements and the state's vast geography.

Under the redistricting board's approach, 59 of the Legislature’s 60 seats will be on the ballot next year; the last time that happened was in 2012. Sen. Donny Olson, a Democrat from Golovin, has the only seat that won't be up.

Hughes cited the dynamics of the redistricting process, along with a gubernatorial race next year, a new electoral system for primary and general elections in Alaska that was approved by voters last year, fiscal issues facing the Legislature and a ballot question asking Alaskans if they want a constitutional convention to consider changes to the state Constitution.

“I don't know that there will ever be an election year quite like this one, with all these factors occurring at the same time," she said.