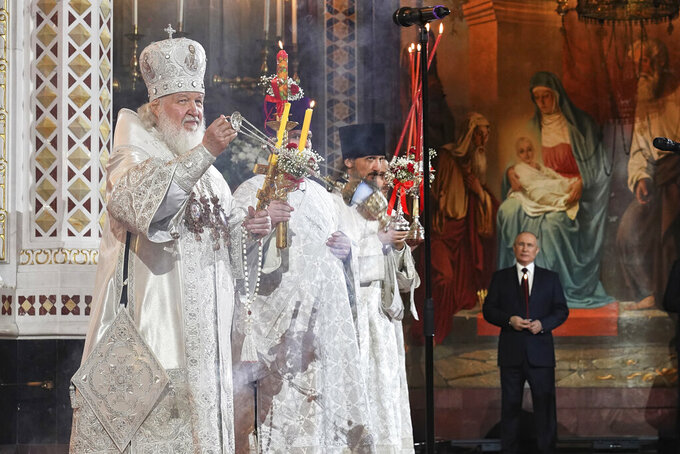 Russian soldiers who die in the line of duty in Ukraine have all of their sins forgiven, the patriarch of the Russian Orthodox Church proclaimed in a sermon, comparing their sacrificial death to that of Jesus.

The assertion, made on Sunday, ratchets up Moscow Patriarch Kirill's already staunch support for Russia's war on Ukraine since its beginning in February.

Kirill has characterized the war as part of a larger metaphysical struggle against an encroaching liberal West, which he depicts as demanding gay pride parades. He has echoed Russian President Vladimir Putin’s depiction of Ukraine as spiritually and politically tied to Russia through their common medieval roots.

But Kirill's latest words raise the rhetorical stakes at a time when Russia has begun mobilizing reservists and has taken steps to annex parts of eastern Ukraine in the wake of military losses to Ukrainian forces.

“If someone, driven by a sense of duty, the need to fulfill an oath, remains true to his calling and dies in the line of military duty, then he undoubtedly commits an act that is tantamount to a sacrifice,” Kirill said in the sermon.

“He sacrifices himself for others," Kirill said. "And therefore we believe that this sacrifice washes away all the sins that a person has committed.”

He compared the sacrifice to that of Jesus on the cross.

His words came even as thousands of Russians have sought to avoid the chance for such martyrdom — leaving the country by land and air rather than being swept up in the mobilization.

Critics of the war were appalled by Kirill's valorization of soldiers fighting in what much of the West has denounced as a war of aggression, accompanied by alleged human rights abuses.

Kirill replaced the Christian concept of martyrdom “with the idea of religious terrorism,” said the Rev. Cyril Hovorun, an Orthodox priest, native of Ukraine and professor of ecclesiology, international relations and ecumenism at University College Stockholm.

Martyrs sacrifice their own lives, but religiously motivated terrorists ”sacrifice their lives and the lives of others," said Hovorun, founder of Orthodox Against War, a project launched after the start of the war. “And the (Russian Orthodox Church) is trying to find an excuse for this activity.”

The patriarch is speaking to an audience of one, Hovorun said.

“I don’t know whom can he convince, because the Russians are listening to him less and less,” Hovorun said. “However, I think the main addressee of Kirill’s messages is Putin. Kirill, through these messages, communicates to Putin: I am with you."

Kirill repeatedly described the war as “fratricidal" and prayed that it not destroy “the single spiritual space of Holy Russia."

But his unswerving support for the war has already helped precipitate a historic rupture in that space. Eastern Orthodox Christianity is the majority religion in both countries.

The Ukrainian Orthodox Church — which had remained loyal to the Moscow Patriarchate until this year, even when other Orthodox in Ukraine had broken away — declared its independence in May. By then, many priests and bishops had ceased commemorating Kirill in their public worship, a ritually potent snub.