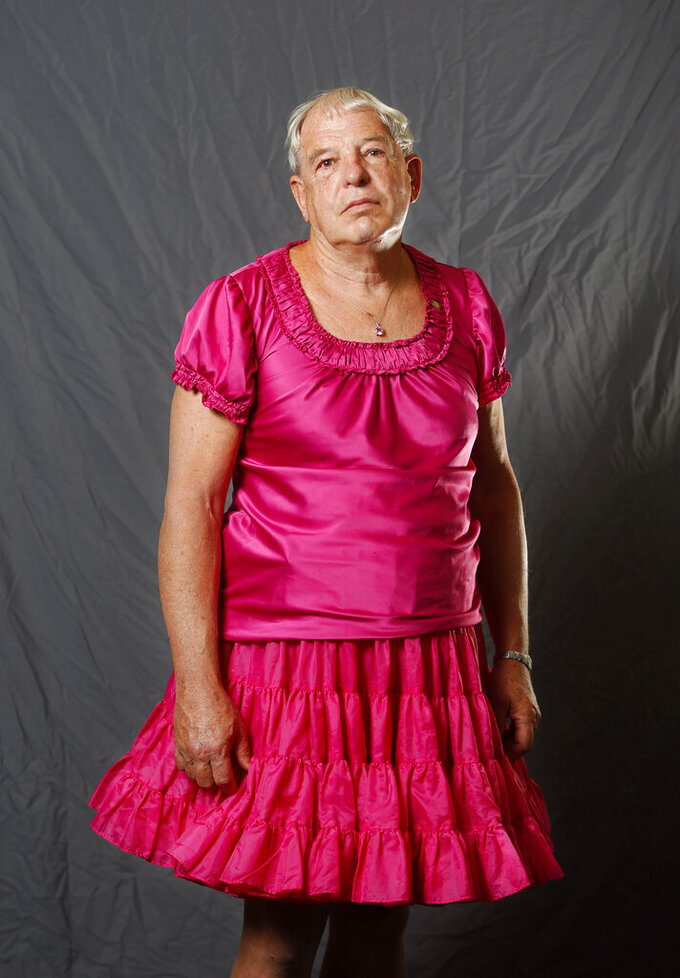 Alan Rogers, ASSOCIATED PRESS
FILE - This April 26, 2017, file photo shows Larry "Sissy" Goodwin posing for a portrait in Casper, Wyo. Goodwin, a Vietnam veteran and retired educator from Douglas who gained national attention for being a Wyoming man who dressed in women's clothing, died March 7, 2020 from stage IV brain cancer. He was 73. With the help of Goodwin's widow, Vickie Goodwin, the Nicolaysen Art Museum in Casper, recently opened a biographical exhibit on Sissy titled, "The Fabric of His Life, Larry Sissy Goodwin," the Casper Star-Tribune reports.(Alan Rogers/The Casper Star-Tribune via AP)

CASPER, Wyo. (AP) — Vickie Goodwin was supposed to meet her husband at the Smithsonian Museum, and he was very, very late.

The Wyoming natives were visiting D.C. for her job, and while she attended a meeting, Sissy had gone off to sightsee. Now he was nowhere to be found. And what could she do? It was 1997, and they didn’t have cell phones.

She was beside herself. Back then, a man could get in a lot of trouble for walking around D.C. in a skirt and blouse.

After a couple of hours, Sissy turned up, Vickie recalled. He had gone to the Vietnam Veterans Memorial, where he met a photographer from the Washington Post, he told her. The Post was taken in by his attire, and wanted to write about him.

Days later, Dateline and Good Morning America called. They wanted to talk, too.

“Do you even want to do any of this?” Vickie recalls asking him. He said he did.

“He was always encouraging me to reach beyond,” she said Tuesday at their Douglas home. She laughed and rolled her eyes as she spoke, as if to say, “That’s Sissy.”

Larry “Sissy” Goodwin’s clothing tended to turn heads — a self-described cross-dresser, he felt most himself in peasant-sleeve tops, skirts and bows in his hair.

The Air Force veteran, former power plant technician and retired Casper educator’s defiance of traditional gender roles had made him something of a Wyoming celebrity. But it was his outspokenness and advocacy that cemented him as a part of the Cowboy State’s shared experience. Those who knew him said he touched lives wherever he went.

Sissy died in March 2020 after battling brain cancer. He was 73.

For the past year, Vickie has been working to preserve her husband’s memory. Sissy opened up his life to others because he wanted to help people like him, she said. This is her way of honoring that wish.

“I think we’re immortal as long as we’re remembered,” she said.

‘The Fabric of His Life’

With Vickie’s help, the Nicolaysen Art Museum in Casper recently opened a biographical exhibit on Sissy titled “The Fabric of His Life, Larry Sissy Goodwin," the Casper Star-Tribune reports.

The exhibit uses a hodge-podge of artifacts from his life — photos, newspaper clippings, personal belongings — to tell his story. His clothes, of course, take center stage.

Each item captures a snapshot moment in time: His stint as a rodeo cowboy. His service as an aircraft mechanic during the Vietnam War. His marriage to Vickie. How he found the confidence to start cross-dressing publicly in the ’70s, all while working at the power plant in Glenrock and raising two kids.

A small theater loops through Sissy and Vickie’s appearance on NPR’s storytelling project, StoryCorps, in 2015, and, yes, their interview with Dateline from the ’90s.

His adept craftsmanship is also put on display. Sissy was a devout aviation enthusiast, for one, but also dabbled in things like winemaking, gardening and photography.

The exhibit is designed not just to share who Sissy was, but to prompt discussion and self-reflection, said the museum’s Curator of Art Amanda Yonker.

Questions printed on the walls call on visitors to think about how they can learn from him. “Have you ever fought for something you felt strongly about?” one reads.

The Nicolaysen’s director, Andy Couch, said he was inspired to open the exhibit after working with playwright Gregory Hinton, a Cody native.

The met in 2018 while Hinton was working on his play, “More Sky”, about Cherokee author Lynn Riggs. Couch was director of a history museum in Riggs’ hometown of Claremore, Oklahoma, so Hinton consulted with him for research.

At some point, Hinton brought up Sissy.

“I told him about this great Wyoming character — this marvelous person who had turned Wyoming on its ear,” Hinton said.

It wouldn’t be long until they crossed paths again. Fascinated by his story, Hinton would go on to write a play about Sissy.

Hinton’s play would give rise to yet another history project: last year, he Hinton connected Vickie with Leslie Waggener, an archivist for the University of Wyoming’s American Heritage Center.

Waggener teamed up with Vickie to record an oral history for Out West in the Rockies, a collection dedicated to archiving LGBTQ narratives. They taped over 22 hours together, Vickie said.

The oral history became the basis of Hinton’s play, “A Sissy in Wyoming”.

Meanwhile, Couch moved to Casper to take over the Nic. The museum got started on the exhibit not long after.

As part of the exhibit, Hinton will be visiting the Nic on Oct. 24. for a read through of his play.

The exhibit follows a summer of anti-LGBTQ bigotry in Wyoming. A biker bar in Cheyenne drew outrage in July for selling t-shirts advocating for violence against gay people. That same month, a transgender woman scheduled to perform a magic show at the Campbell County Library was forced to cancel after receiving threats from Gillette residents. Less than a week later, another transgender woman was severely beaten in Casper.

That Sissy had made a big enough splash to spur a 22-hour oral history, play and an art exhibit wasn’t by chance, said Hinton.

“He really had an eye on being remembered,” he said.

He sought out opportunities to talk about his life, struggles and ideas with others — and he was very good at it, she added. People were captivated by Sissy’s humble charm, sense of humor and the smart way he talked about the world.

He spoke candidly about what he’d gone through: The verbal abuse. The broken windows. The day someone attacked him in his own yard and kicked his teeth in. His arrests in Casper and Salt Lake City.

He was open, too, about his struggle for self-acceptance.

His decision to go by “Sissy” was part of that journey. “Sissy” is a slur meant to demean anyone who defies traditional male gender roles, especially gay and bi men, and transgender women. Adopting it as his name was his way of reclaiming and neutralizing the term, he’d tell people.

Beyond appearances in talk shows and newspapers, he also worked with local advocacy groups to promote LGBTQ rights. He served on the board of the Wyoming ACLU, and both he and Vickie were members of Wyoming Equality.

He gave talks about gender diversity at Eastern Wyoming College and Casper College, where he also taught technology classes for several years.

“He always started out by saying, ‘Most women I know wear jeans and t-shirts. Makes me wonder about some of you guys out here,’” Vickie said.

He could turn even snide remarks into teachable moments, she added.

In response to a question about LGBTQ rights in Wyoming, Enzi told students the state is generally tolerant as long as they “don’t push it in somebody’s face.”

“I know a guy that wears a tutu and goes to the bars on Friday night and is always surprised that he gets in fights,” he said.

Many read his words as an oblique reference to Sissy. Though Enzi denied this, he later personally apologized to Sissy over the phone.

“We had a nice conversation,” Sissy told the Tribune. “He offered an apology and I have no doubt to believe it was genuine.”

The Nic’s exhibit was met with an outpouring of support from community members.

At the opening reception Oct. 1, visitors hung around exchanging favorite memories of Sissy — as if becoming part of the exhibit themselves.

Witnessing so many people mobilize to keep Sissy’s memory alive has been tremendous, Hinton said. The word “bashert” comes to mind, he said — Yiddish for “it’s meant to be.”

Hinton has dedicated much of his career to depicting the lived experiences of LGBTQ people in the rural West. He knows how often stories like Sissy’s are overlooked, forgotten and erased, he said.

The Goodwin household is its own monument to Vickie and Sissy’s time together. Shelves proudly display photos of their smiling faces, keepsakes from years long gone, party decorations from their 50th wedding anniversary.

Traces of Sissy’s handiwork are everywhere: he installed the kitchen tile and the cabinets, dug the koi pond out back.

(She loves butterflies. One coffee mugs reads: “Love is like a butterfly, it takes you to magical places!”)

In the meantime, she’s staying busy, she said. She’s president of the Converse County Library Board, and active in the county’s Democratic Party. Her free time is filled with writing, crafting and spending time with her grandkids.

Sometime soon, Vickie plans to stop by the exhibit at the Nic again. She was there opening night, but is looking forward to going back through at her own pace, she said.

It’ll be a private moment to take it all in, and maybe shed a few tears.

Looking back on her 51 years with Sissy has been at once cathartic and eye-opening, Vickie said.

Vickie’s considering writing a memoir about Sissy and herself, she said. There are plenty more stories to share.