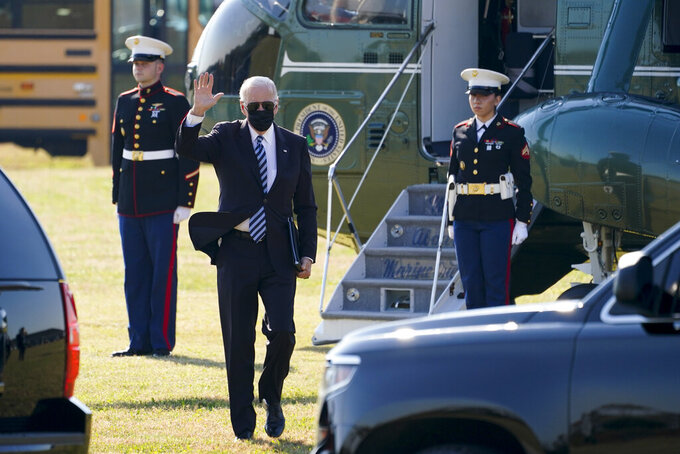 Minner, a sharecropper’s daughter, high school dropout and widow, was the only woman to serve as Delaware’s governor, holding office from 2001 to 2009. She died Thursday at the age of 86.

Friends, family and fellow politicians, including President Joe Biden, paid tribute to her Wednesday during a funeral at Milford Church of the Nazarene. They recalled her as a woman who was driven by steely determination but never forgot her humble upbringing and maintained a sense of empathy for fellow citizens.

“Each time she climbed up the political ladder, she always stayed grounded in the lives of everyday people,” said Biden, who represented Delaware in the U.S. Senate for decades.

During her decades of public service as a state lawmaker, lieutenant governor and governor, Minner served as a mentor and role model for many of those who attended her funeral.

“Like many of you in this church, I would not be here today as your governor were it not for Ruth Ann Minner. It’s just that simple,” said Gov. John Carney, who served two terms as Minner’s lieutenant governor. “She set the standard for all of us.”

“Ruth Ann was tough, because she had to be ... but she also was extremely warm and kind,” Carney added. “She governed from this deeply human place. She had a real understanding of human suffering and struggle and unfairness and pain.”

Minner left school at 16 to work on the family farm and got married a year later. Her husband, Frank Ingram, died of a heart attack at age 34 in 1967, leaving his 32-year-old widow to raise three boys while managing the family’s asphalt paving business. Faced with being the sole breadwinner for her sons, Minner earned a GED and briefly studied elementary education at a community college.

“She may not have had a great formal education ... but she had an advanced degree in common sense,” said U.S. Sen. Tom Carper, whom Minner succeeded as governor after serving two terms as lieutenant governor.

Minner’s career in elective office began when she won a state House seat in 1974, having first tasted politics as a bill clerk in the General Assembly, then as a receptionist for Gov. Sherman Tribbitt. She served in the House until 1982, when she was elected to the state Senate, where she served for 10 years. Minner’s signature achievement as a lawmaker was the Delaware Land and Water Conservation Act, which led to the preservation of more than 30,000 acres (12,100 hectares) of open space.

Minner’s legacy as governor includes signing one of the nation’s toughest prohibitions on smoking in public places in 2002. Before signing the smoking ban, she oversaw the creation of the Delaware Advisory Council on Cancer Incidence and Mortality, which, as the Delaware Cancer Consortium, still works with lawmakers to reduce Delaware’s cancer rates.

Other landmark legislation included a 2007 measure prompted by the child sex abuse scandal in the Catholic Church. The bill abolished Delaware’s two-year time limit for filing personal injury lawsuits and established a two-year period during which lawsuits previously barred by the passage of time could be brought anew. The bill resulted in more than 100 lawsuits, prompting the Catholic Diocese of Wilmington to seek bankruptcy protection and to settle with victims of priest sex abuse for $77 million.

A fiscal conservative who espoused liberal social views, Minner also was instrumental in the establishment of a state scholarship program that has provided free college tuition to more than 13,000 Delawareans, and in bolstering efforts to preserve farmland and open space.

“No wonder she was a tireless champion in protecting Delaware’s public lands and waters,” Biden said. “Sounds corny, but she was a farmer’s daughter.”