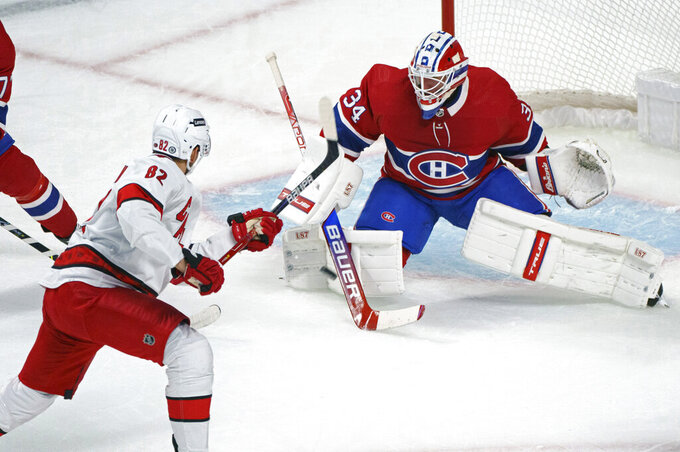 MONTREAL (AP) — Jesperi Kotkaniemi scored his first goal for Carolina in his return to Montreal, helping the Hurricanes beat the winless Canadiens 4-1 on Thursday night.

The 21-year-old Kotkaniemi left the Canadiens for the Hurricanes over the summer after signing a $6.1 million offer sheet. The Finn was booed every time he touched the ice, let alone the puck.

“I didn’t really know what to expect so I just kept an open mind,” Kotkaniemi said about the crowd’s reaction. “It gets your going a little bit. It was a little funny. I laughed when I stepped on the ice”

With 10:37 to go, Kotkaniemi tipped in a shot from Brady Skjei to restore Carolina’s two-goal lead.

“It was a really big relief after those first two games,” Kotkaniemi said. “Our line had a pretty solid night so have to keep building on that and take it into the next game.”

Sebastian Aho had two goals and an assist, Andrei Svechnikov also scored and Vincent Trocheck and Teuvo Teravainen each had two assists.

“That was the game right there. We did a heck of a job there and the killers came up big,” Hurricanes coach Rod Brind’Amour said. “(Andersen) was really good tonight too. That’s the difference in games, but we can’t take all those penalties and then rely on the goalie that much.”

Jake Allen made 29 saves as Montreal dropped to 0-5-0 after reaching the Stanley Cup Finals last season.

Hurricanes: At Columbus on Saturday night.