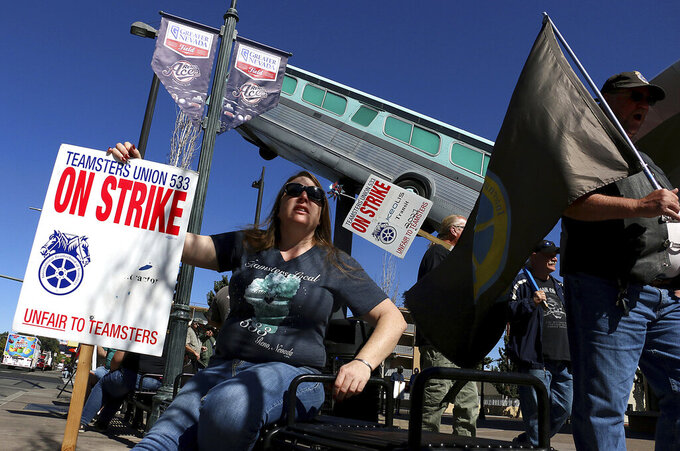 Jason Bean, ASSOCIATED PRESS
RTC bus driver Lisa Hickman, left, and other members of Teamsters Union 533 hold a rally as they strike at the 4th Street Bus Station in Reno, Nev., Monday, Sept. 30, 2021. Union leaders and the Washoe County contractor that operates Reno's regional bus system are headed back to the bargaining table Thursday, Oct. 7, 2021, to try to negotiate the end of a nearly two-week-old strike, the second since August. (Jason Bean/The Reno Gazette-Journal via AP)

RENO, Nev. (AP) — Union leaders and the Washoe County contractor that operates Reno's regional bus system were headed back to the bargaining table Thursday to try to negotiate the end of a nearly two-week strike, the second since August.

Bus service has been limited to a few main, streamlined routes, creating a hardship for riders who say they've faced long waits to be picked up.

John Brainard, who has worked at the Club Cal-Neva in downtown Reno for 17 years, said he’s resorted to paying $20 cab fares to get to work, but that it’s not an option for many.

“People, especially people that work in these casinos, they’re not making enough to take a cab. And they definitely don’t want to walk miles before they come into work and be on their feet for at least eight hours and then walk back,” Brainard told the Reno Gazette Journal.

Gerard London, a sales manager whose been taking the bus to work for seven years, is continuing to do so. But he said he’s had to wait up to two hours, and there’s no consistency.

All rides are free during the strike. The Regional Transportation Commission also is offering free rides residents can schedule on the phone or through its apps, along with vouchers for taxis and UberX.

“These repetitive strikes are harming those who can least afford it and rely on public transportation, especially during the pandemic,” Jardon said in a statement last week.

A 10-day strike in August ended when about 200 bus drivers returned to work after negotiators reached a tentative settlement with details still to be worked out. The initial dispute, centered on health care coverage, has widened over the company’s desire to change the way drivers’ routes and schedules are decided.

“The members have had this type of scheduling for 40 years, and it has worked,” Watson told News 4/Fox 11.

Mike Ake, Keolis North America regional vice president for operations, told the broadcasters it was “unprecedented” to call for a work stoppage while the two sides were actively negotiating a new collective bargaining agreement.

“We were shocked, frankly. I mean we were in the middle of active negotiations,“ Ake said. “We had (tentatively) agreed to some articles, and then out of the blue he calls a strike.”