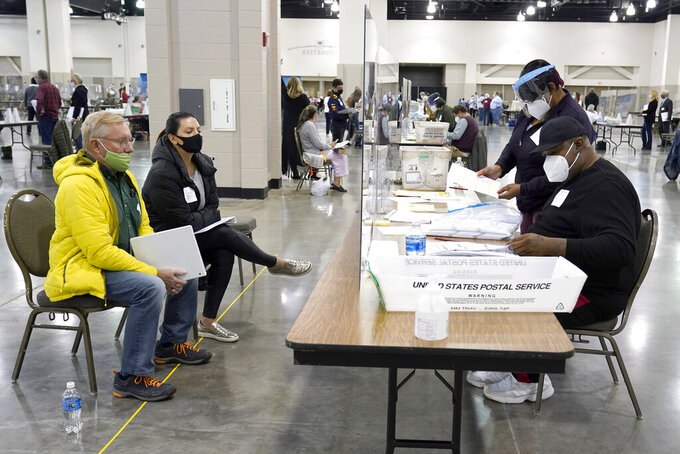 Nam Y. Huh, ASSOCIATED PRESS
FILE - In this Nov. 20, 2020 file photo, election workers, right, verify ballots as recount observers, left, watch during a Milwaukee hand recount of presidential votes at the Wisconsin Center, in Milwaukee. The Republican head of the Wisconsin Assembly elections committee said Monday, July 26, 2021, she will ensure there is a "comprehensive, forensic examination" of ballots cast in the 2020 presidential election at the same time the state's nonpartisan audit bureau conducts a review. (AP Photo/Nam Y. Huh, File)

MADISON, Wis. (AP) — The Republican head of the Wisconsin Assembly elections committee said Monday she will ensure there is a “comprehensive, forensic examination” of ballots cast in the 2020 presidential election at the same time the state's nonpartisan audit bureau conducts a review.

The broadened investigation comes amid pressure from former President Donald Trump and other national Republicans to take a closer look in Wisconsin, a state President Joe Biden won by just over 20,000 votes. There is no evidence of widespread fraud and courts rejected numerous lawsuits filed by Trump and his allies attempting to overturn the outcome. Democrats have derided calls for more investigations as feeding into conspiracy theories and lies that Trump actually won the state.

One of the loudest critics of how the election was run is Rep. Janel Brandtjen, chair of the Assembly elections committee. She said in a statement Monday that her committee will request additional materials to conduct a deeper review.

The committee's investigation is in addition to a review ordered by Republican Assembly Speaker Robin Vos, being done by three retired police detectives and overseen by a former Wisconsin Supreme Court justice, and the independent review by the audit committee.

Another separate, independent investigation is being done by several individuals convinced there was widespread fraud in Wisconsin, despite no evidence. That effort is being led by Peter Bernegger, who was convicted of mail fraud and bank fraud in federal court in Mississippi in 2009.

The type of probe Brandtjen describes mirrors a widely discredited audit done in Arizona. Brandtjen and three other Wisconsin Republicans traveled to Arizona last month to observe that review.

“The people of Wisconsin deserve to know the truth about the 2020 election,” Brandtjen said in a statement. She said her committee will look into “broader issues that have been raised” in the “most transparent and coordinated way possible.”

Trump's loss to Biden in Wisconsin withstood a partial recount ordered by Trump in Milwaukee and Dane counties, the two most heavily Democratic counties.

Trump himself has been putting pressure on Wisconsin Republicans. Last month he called out the three highest ranking Republican legislative leaders, saying they were “working hard to cover up election corruption.” The Wisconsin Republicans said Trump was misinformed, but they have also facilitated more reviews of the election outcome.

There are almost no documented cases of election fraud in Wisconsin.

Two people have been charged with election fraud, out of more than 3 million votes cast in the state, and prosecutors are still reviewing a handful of other cases that were among 27 forwarded to them by election officials. Similarly, very few potential voter fraud cases have been identified in Arizona where the type of audit envisioned by Brandtjen was done.

Brandtjen repeated concerns raised by Trump and his allies about absentee voting by people who said they were “indefinitely confined,” which under state law meant they did not have to show a photo ID to obtain their ballot, and about election officials filling in missing information on the envelopes that contained absentee ballots. That practice was done for prior elections under guidance from the Wisconsin Elections Commission.

“Voters have made it clear that they want a thorough, cyber-forensic examination of tabulators, ballot marking devices and other election equipment, which I will be helping facilitate,” Brandtjen said. “IP addresses, chain of custody on ballots and audit trail logs must be thoroughly inspected by cyber-audit technicians in order to provide confidence for voters in our elections, both completed and upcoming.”

“Wisconsin deserves better than right-wing extremists pretending to have insight into elections that they lost,” Spreitzer tweeted.