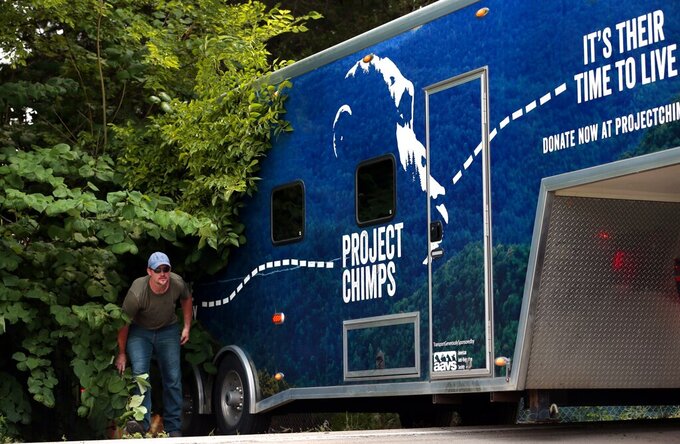 Robert Cohen, ASSOCIATED PRESS
Workers from Project Chimps of Blue Ridge, Georgia, leave a Festus-area facility in the 12300 block of County Road CC in Maryland Heights, Mo., after taking away chimpanzees under a judge's order on Wednesday, July 28, 2021. The caretaker of the animals, Tonia Haddix, was under a court order to turn over all of the chimps to representatives of the People for the Ethical Treatment of Animals. The judge's order capped a years long dispute over the fate of the chimps, after a 2016 PETA lawsuit claimed that chimps were being held in inadequate conditions at the Missouri Primate Foundation facility. The suit said the chimps' treatment violated the federal Endangered Species Act. (Robert Cohen/St. Louis Post-Dispatch via AP)

JEFFERSON COUNTY, Mo. (AP) — Six chimpanzees have been removed from their caretaker under a court order after People for the Ethical Treatment of Animals claimed in 2016 that the chimps were being held in inadequate conditions.

The chimps were removed Wednesday from a Festus-area facility. Jefferson County sheriff’s deputies and the U.S. Marshals Service oversaw the removal of the chimps out of concern that their caretaker, Tonia Haddix, or others would try to block the effort.

U.S. District Judge Catherine Perry's order capped a yearslong dispute over the fate of the chimps, after a 2016 lawsuit claimed they were being held in “confined in cramped, virtually barren enclosures” at the Missouri Primate Foundation facility.

According to the suit, Haddix and the facility's treatment violated the federal Endangered Species Act.

Haddix had been in a series of court hearings after not complying with a different court order that followed a 2020 consent decree she signed with PETA in which she agreed to turn over four chimps and would have been allowed to keep three at a facility she was to build, according to the St. Louis Post-Dispatch.

PETA repeatedly complained that Haddix was not complying with the consent decree. At an April hearing in U.S. District Court in St. Louis, Perry ruled for the first time that she had violated the decree.

The chimps’ removal came a day after the 8th U.S. Circuit Court of Appeals refused an emergency request to put it on hold.

Haddix did not return messages from the Post-Dispatch. Jared Goodman, a PETA lawyer, said in an email, “PETA’s rescue team is focused on carrying out the federal court order to remove all chimpanzees from the Festus facility. Details will be available after the rescue is complete.”