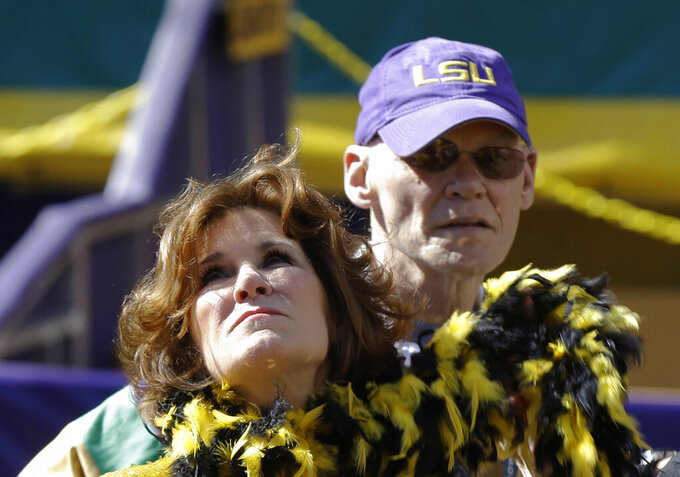 Gerald Herbert, ASSOCIATED PRESS
FILE - This Feb. 3, 2013, file photo shows political pundits and New Orleans Super Bowl Host Committee Co-Chairs Mary Matalin left, and James Carville in New Orleans. The couple have replaced the New Orleans mansion that they sold for $3.3 million with a condo. Carville tells The Times-Picayune / The New Orleans Advocate that they like the fact that it's on one floor and is less than half the size of their former house. (AP Photo/Gerald Herbert, File)

NEW ORLEANS (AP) — Bipartisan power couple James Carville and Mary Matalin have replaced the New Orleans mansion that they sold for $3.3 million with a condo.

They like the fact that it’s on one floor and is less than half the size of their former house, Carville told The Times-Picayune / The New Orleans Advocate.

The 3,100-square-foot (288-square-meter) condo sold for nearly $2 million, the newspaper reported. The six-unit building is in a neighborhood with many high-end restaurants.

“It’s right behind Herbsaint,” Carville said, naming one of those restaurants. “It’s a cool neighborhood, a cool place; I’m loving it.”

Willingness to avoid debating politics and mutual dedication to raising daughters Matty and Emerson helped sustain them, the couple wrote in “Love and War,” a book published in 2014.

Their daughters are now in college.

After selling their 8,200-square-foot (760-square-meter) house in May, the couple moved temporarily to their “camp” in Bay St. Louis, Mississippi.

Although “totally retired,” Carville said he plans occasional lectures at Louisiana State University, where he graduated and was from 2018 until recently an adjunct professor. He said he will also continue to do regular television commentary and may write another book.