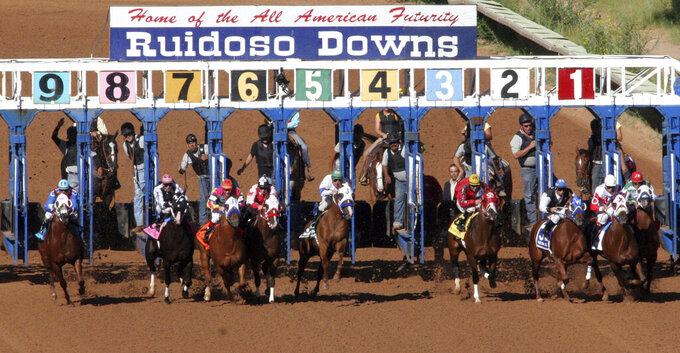 ALBUQUERQUE, N.M. (AP) — Easing rules around online betting would help ensure the survival of New Mexico's horse racing industry as it faces intensifying competition for attention from gamblers in the state and around the world, a top racing official told a panel of state lawmakers Thursday.

New Mexico law prevents residents from betting on races held at any of the state's five tracks, but they can place bets on races in neighboring Texas, California or any other state.

Track owners and horse breeders say this led to lost revenue for the multimillion-dollar industry, which has seen its economic effects — like spending on feed, fuel and labor — dwindle by nearly 25% over recent years. The decline of the industry has been more precipitous in New Mexico than in other states, with the number of races and the number of horses being bred also dropping.

Of the five people who testified Thursday, most were representatives of the industry.

Izzy Trejo, the Racing Commission’s executive director, told lawmakers that horse racing has evolved beyond simple times when tracks would bank on fans turning out in person to place their bets and later via simulcast races.

“We used to be king of the hill back in the ’40s, ’50s and ’60s. That’s no longer the case,” Trejo said. “There are no more golden goose eggs for horse racing. Right now we’re merely going to be picking up crumbs to try to make the cookie complete with the sports wagering, online wagering, advance deposit wagering.”

Trejo said that in New York, about 91% of sports wagering was done with a mobile device, and that number was slightly higher in Pennsylvania. He said the coronavirus pandemic helped to boost those numbers as more people opted to stream movies and place bets from the comfort of their homes.

“We’ve got to get out of the dark ages here in New Mexico,” he said.

University of New Mexico economics professor David Dixon presented figures that showed the state's horse racing industry had an economic impact of about $677 million in 2016, and saw a significant decline over a 10-year period.

Dixon noted that gambling represents a transfer of wealth from one person to another, and that the real economic value comes from spending by horse owners, breeders and the tracks on feed, fuel, veterinarian services, other supplies and payroll.

His research also included statistics that showed fewer race horses were being bred and there were fewer races being held, both in New Mexico and nationwide.

Tom Goncharoff, president of the New Mexico Horse Breeders Association, said a silver lining is that horse sales have been setting records for the past two years. He pointed to a recent sale in Kentucky in which yearlings were sold for over $1 million each.

Goncharoff also raised concerns about New Mexico leaving money on the table by not updating its sports betting laws.

Making changes in New Mexico would require renegotiation of revenue sharing agreements the state has with Native American tribes that operate casinos.

Rep. Antonio Maestas, the Albuquerque Democrat who chairs the Legislature's Economic Development and Policy Committee, said he is starting conversations with some tribal leaders about the potentially reconsidering those parts of the compacts that are seen as outdated.

Purse money for New Mexico races has remained steady — between $52 million and $55 million a year — and expanding the opportunity for more online wagering would increase that figure, industry officials testified.