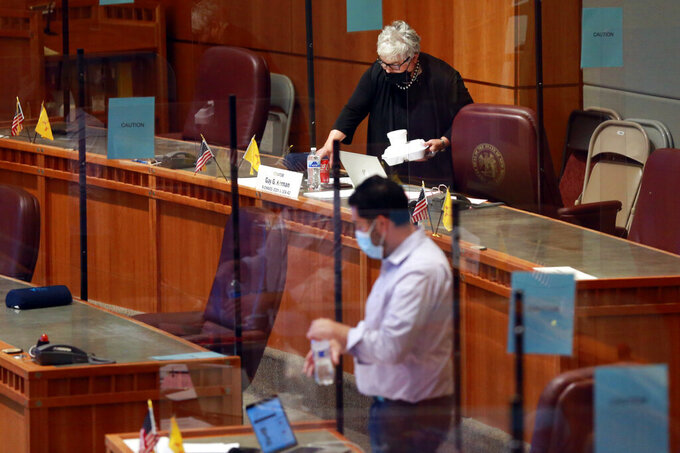 Cedar Attanasio, ASSOCIATED PRESS
Republican state Sen. Gay Kernan, of Hobbs, takes a lunch paid for by a lobbyist on Wednesday, Oct. 6, 2021, in Santa Fe, N.M. The internet provider Comcast paid for Tuesday's lunch for members of the Legislative Education Study Committee, and Amplify Education paid for lunch on Monday. Both companies do business with school districts or the state's education department, which are funded by the Legislature. (AP Photo/Cedar Attanasio)

SANTA FE, N.M. (AP) — Companies clamoring for contracts on internet services and student testing are buying legislators free lunches at meetings about education policy. It’s a legal and a frequent practice that some people find unappetizing.

On Tuesday, Democratic and Republican state legislators and their policy staff enjoyed enchiladas, roast beef sandwiches, steak salads, and other entrees with soft drinks and sides “Sponsored by Comcast," according to an agenda released by the Legislative Education Study Committee.

The New Mexico Foundation for Open Government says that as long as they are disclosed, it’s legal for companies to buy legislators lunches and give gifts.

“And then the public needs to ask ‘Why are they doing that?’ ” said Melanie Majors, the foundation’s executive director.

“If the industry didn’t want anything from the legislators, then why would they be providing them with lunches?” New Mexico Ethics Watch executive director Kathleen Sabo said. “It’s just human nature. If somebody gives you something, (...) you’re going to react more favorably to them.”

Comcast's name also appeared before the committee on Monday in a budget comparing cost estimates from internet vendors collected by a school district in southern New Mexico. The Comcast estimate district was around $1.6 million.

Around two dozen districts are required to prepare plans to provide internet to students due to a state court ruling, and legislators are deciding if they will provide additional support to districts when they meet in February for a 30-day lawmaking session.

But they have considered legislation that would make it easier and cheaper for Comcast to expand its costly internet delivery system, which involves the laying of a physical cable, sometimes along trenches controlled by the state or public utilities.

Republican Sen. Gay Kernan, of Hobbs, said sponsored lunches have been common practice in her 19 years serving the legislature, and that a sandwich can't buy her vote.

“It doesn’t influence me one way or the other,” said Kernan, adding that she doesn’t decide which companies the education department selects for contracts.

A former state legislator who says he refused to accept as much as a bottle of water from lobbyists believes there is a problem.

“The appearance of impropriety is always there when you accept something free, number one. Number two is only the legislator themselves know whether or not they’re being influenced,” said retired Republican representative Jim Dines, a former attorney who now lives in Lubbock, Texas.

Dines lost his seat to a Democrat in 2018, after serving in the state House for three years.

More recently, lawmakers have called for tightening disclosure laws. Two proposed this year never got a vote, however.

As committee chair, Democrat Sen. Bill Soules of Las Cruces, has final authority over which businesses get to pay for lunch, which can earn them a few minutes to pitch their products to legislators. Soules said that he delegates the decision to staff. He echoed colleagues who said the lunches don’t affect their votes.

Many legislators including Kernan say they are happy to accept free lunches in part because they are some of the few legislators in the country who don't get a salary. They are eligible for a pension after 10 years of service and receive a daily stipend to offset travel costs. Kernan says the stipend is not enough to pay for lunches.

Sabo, of New Mexico Ethics Watch, is a former legislative aide who says staff and legislators depend on food during the legislative sessions and interim committee hearings.

She estimates it could cost around $50,000 to provide legislators with meals, and has drafted a law that would pay for their food. She has shopped it around to legislators for the past two years and is still looking for one to sponsor it.

Amplify currently has contracts for some science education curriculum but wants to do more business with the state, according to Kernan’s account of their presentation.

She said she likes Istation and wouldn’t advocate for Amplify to replace its annual testing. But she welcomed “the opportunity to learn from Amplify” about mid-semester testing service.

Amplify began lobbying in New Mexico this year and is required to disclose Monday's lunch in a tri-annual disclosure due Thursday. In North Carolina, Amplify Education lost a bid for testing to Istation and complained to state officials in what became a lengthy administrative dispute it ultimately won.

A lobbyist registered on behalf of both Comcast and Amplify, Joe Thompson, declined to comment.

Comcast spokeswoman Julianne Phares said the company didn’t present any products at Tuesday’s lunch. She declined to comment on what the company hopes to gain by sponsoring the lunch, or how much it cost.

Amplify Education denied sponsoring the lunch, calling the listing of the company on the committee's agenda an “error.”

“We showed up, and we were surprised to see that our name was on the agenda, to see that we were listed as a sponsor,” said Amplify spokeswoman Kay Moffett. “It’s not our typical practice to entertain legislators.”

About 15 minutes before the initial publication of this story on Wednesday, Thompson filed a disclosure for Monday's lunch listing himself, and not Amplify, as the sponsor, according to documents filed with the New Mexico Secretary of State. Amplify Education is Thompson's only education client, according to disclosures.

Moffett said that another of the company's lobbyists met with Sen. Kernan for 15 minutes in the Senate lounge, but did not give a formal presentation.

Because the lunch was reported on Oct. 4, on the first day of a three-times-per-year reporting window, the Comcast disclosure won’t be public until Jan. 15, after legislation is beginning to be filed for the 2022 legislative session.

Dines, the retired legislator, said disclosure laws don't fully inform voters of the influence money has over elected officials. State law limits lobbyists to giving $1,000 to anyone legislator or state employee but doesn't require them to report gifts, including who accepts a lunch.

“What the public doesn’t see is how much does that all amount to over a period of a year from a dollar or value standpoint,” Dines said.

This version corrects that the internet budget listing Comcast was an estimate, not a bid; that Amplify Education's dispute over a state testing contract was in North Carolina, not South Carolina; and that Amplify's science product in New Mexico is a curriculum, not a test.