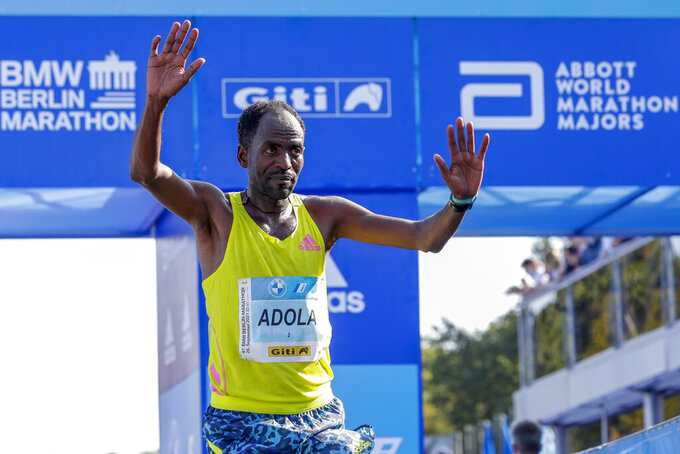 BERLIN (AP) — Guye Adola of Ethiopia won the Berlin Marathon on Sunday, when compatriot Kenenisa Bekele’s attempt to break the world record was undone by warm weather and a blistering start to the race.

Adola was runner up to Eliud Kipchoge in Berlin on his debut in 2017 and the 30-year-old went one better by winning in 2 hours, 5 minutes and 45 seconds.

“I thought before the race I could beat Kenenisa,” Adola said. “It was so hot, my feet were burning in my shoes.”

“The big problem for me was the lack of training because of the pandemic,” said Bekele, who was running nine months after recovering from COVID-19. “I wanted to do well in Berlin but I just couldn't do as well as I hoped. That doesn't mean my career is over.”

The 39-year-old Bekele had been hoping to beat Kipchoge’s world record of 2:01:39 set in Berlin in 2018. He came within two seconds of the mark when he won in 2019, but finished more than five minutes off the mark this time. He appeared to be struggling after dropping behind the leaders around the 18-kilometer mark.

Gotytom Gebreslase of Ethiopia won the women’s race in 2:20:09 on her debut, ahead of compatriot Hiwot Gebrekidan in 2:21:23.

“Although it was my first marathon, I was running to win,” the 26-year-old Gebreslase said. “The course in Berlin was very nice and I want to come back to run the race again.”

Gebrekidan had been the favorite after winning in Milan this year with a personal best of 2:19:35 – still the fastest time for any woman in the marathon in 2021.

There was no wind but it was warm on an idyllic sunny autumn day in the German capital.

Last year’s Berlin Marathon was called off due to the coronavirus pandemic and it only returned under strict hygiene measures.

Participant numbers were reduced from a high of 43,987 finishers in 2019 by nearly half, and anyone taking part had to show proof of vaccination, recovery from COVID-19, or have a negative PCR test result. Spectators were asked to keep their distance and wear face masks. Most people obliged.

The elite runners and many others also wore face masks to begin the 42.2-kilometer (26-mile, 385-yard) course, though the masks were quickly discarded and left strewn across the road at the start.

Bekele and the leading group covered the first 15K in 43:11 – well on course to beat Kipchoge’s record. But Bekele dropped back a couple of kilometers later. The leaders reached the halfway point in 1 hour, 48 seconds, with Bekele following 12 seconds behind.

By the time the 39-year-old caught up with the others, it was clear that Kipchoge’s record was safe.

Adola made his move to leave Bekele trailing around the 35K mark. He was leading Kipchoge at a similar stage in 2017 when he finished runner-up, but Bekele did not look like he’d be able to mount a comeback.

Then Yegon – who hadn’t followed the early lead – surprised Bekele by moving second. He kept going and soon surprised Adola, too.

Adola attacked again, however, to reclaim the lead and finish with a comfortable advantage.