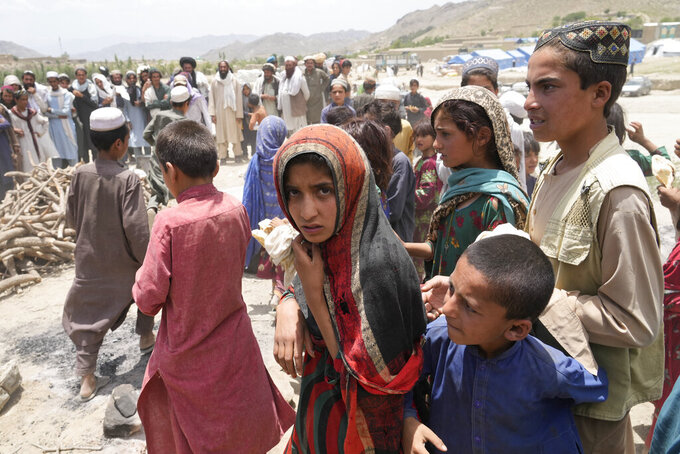 GAYAN, Afghanistan (AP) — The death toll of children in last week's devastating earthquake in southeastern Afghanistan has risen to at least 155, the United Nations said as the scope of the deadliest quake to hit the impoverished country in two decades comes into focus.

The U.N.'s humanitarian coordination organization, OCHA, said on Sunday that another 250 children were injured in the magnitude 6 temblor that struck the mountainous villages in the Paktika and Khost provinces near the country’s border with Pakistan, flattening homes and triggering landslides.

Most of the children died in Paktika’s hard-hit Gayan district, which remains a scene of life in ruins, days after the disaster. The quake has also left an estimated 65 children orphaned or unaccompanied, the U.N. humanitarian office added.

Even as badly needed food, medicine and other international aid has trickled into the provinces on precarious dirt roads, despair is growing among newly homeless survivors. Many villagers who were scraping by have lost everything.

In ravaged Gayan, villagers are grappling with the extent of the tragedy.

When the earthquake last week demolished his house and those around it, Abdullah tried to claw through the rubble and rescue his children.

For hours, he called for help, shouting from under a deep pile of mud. When he and his neighbors finally cleared the wreckage, he discovered a nightmarish scene — the bodies of 12 family members, including his son and daughter, laying dead in the debris. Four other relatives were injured.

“What happened that night is very difficult to explain in words,” the 65-year-old farmer and teacher, who like many Afghans goes by one name, told The Associated Press. “Everything is under the ground now. We have just buried the bodies.”

He pulled away more rubble from his collapsed mud-and-brick home with a pickaxe, uncovering books that serve as mementos of lives violently upended. Like other villagers, Abdullah now lives with his surviving family members in a donated tent. He fears the freezing winter.

Afghanistan’s Taliban rulers have put the total death toll from the quake at 1,150, with hundreds more injured, while the U.N. has offered a lower estimate of 770, although it has warned the figure could still rise.

Abdul Rahman, Abdullah's son, lost two wives, a son and three daughters in the quake. His only surviving child is just a few months old.

“This little child has been left alone,” he said, cradling his swaddled body. The baby's hammock, strung in the corner of their destroyed home, swayed with the weight of fallen bricks. “Who should take care of him?”

The disaster — the latest to convulse Afghanistan after decades of war, hunger, poverty and an economic crash — has become a test of the Taliban's capacity to govern and the international community's willingness to help.

When the Taliban seized power in Afghanistan as the United States and its NATO allies were withdrawing their forces last August, foreign aid stopped practically overnight. World governments piled on sanctions, halted bank transfers and froze billions more in Afghanistan’s currency reserves, refusing to recognize the Taliban government and demanding they allow a more inclusive rule and respect human rights.

The former insurgents have resisted the pressure, imposing restrictions on the freedoms of women and girls that recall their first time in power in the late 1990s, triggering Western backlash.

Aware of their limitations, the Taliban have appealed for foreign aid. The U.N. and an array of overstretched aid agencies in the country that have tried to keep Afghanistan from the brink of starvation have swung into action.

The U.N. children’s agency said on Monday it was working to reunite children who had been separated from their families in the chaos of the quake. It also has set up clinics to offer mental health and psychological support to children in Gayan traumatized by the disaster.

But U.N. agencies face a funding shortfall of $3 billion this year. Authorities and charities are struggling to access the far-flung region and appear overwhelmed by the scale of the damage and the daunting task of debris removal, let alone reconstruction.

That has forced many in the quake-ravaged region to fend for themselves, even as the ground rumbles with more aftershocks and the fear of further disaster looms.

“Still, there are earthquakes. ... We can't come near our houses,” Abdullah said. “Everyone has fear. Women and children are shouting inside the tent."