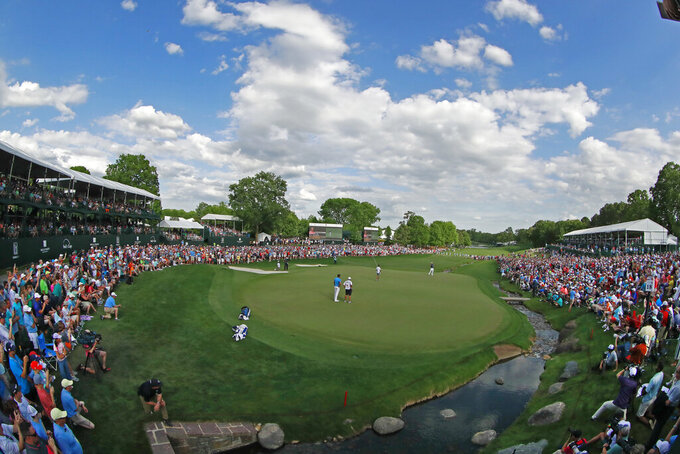 Last time: The U.S. rallied in Sunday singles to win at Royal Melbourne, 16-14, with Tiger Woods as a playing captain.

Notes: The Americans have won the last eight times and their only loss was in 1998 at Royal Melbourne in Australia. ... Davis Love III is a U.S. captain for the third time in the last 10 years, the previous two at the Ryder Cup. ... The International team lost at least four eligible players to the Saudi-backed LIV Golf series. ... Only three of the 12 players for the International team have won this year — Hideki Matsuyama (Sony Open), K.H. Lee (AT&T Byron Nelson) and Tom Kim (Singapore, Wyndham Championship). ... All 12 of the American players are among the top 25 in the world ranking. ... Quail Hollow typically hosts the Wells Fargo Championship. It also held the PGA Championship in 2017 won by Justin Thomas. ... Adam Scott is playing on his ninth consecutive team. He needs to win two points to set the record for the International team. ... Jordan Spieth is playing the Presidents Cup for the fourth time, the most of any American on this team.

Notes: Andrea Lee became the ninth first-time winner on the LPGA Tour this season. She started the year on the developmental Epson Tour. ... Maria Fassi knows the course well from her four years playing at Arkansas. She is No. 67 in the Race to CME Globe. The top 60 reach the CME Group Tour Championship at the end of the year. Weiwei Zhang of China birdied her final hole in Portland to finish in the top 10, earning her a spot in the field this week. ... Nelly Korda is the highest-ranked player in the field at No. 2 as she tries to regain the No. 1 ranking from Jin Young Ko, who is out for a month resting her left wrist. ... The field includes eight of the top 10 players from the women's world ranking, missing only Jin Young Ko and Brooke Henderson. ... Three U.S. tournaments remain before the LPGA takes its two-tournament Asia swing. ... Daniela Darquea of Ecuardo was runner-up last week and moved up 48 spots to No. 59 in the Race to CME Globe. She is in the field this week.

Next week: Volunteers of America Classic.

Notes: The tournament was canceled the last two years because of the COVID-19 pandemic. ... Patrick Reed is playing his second European tour event in three weeks, having played in the LIV Golf series last week. It's his fourth straight week playing, a schedule that has taken him from Boston to London to Chicago to Paris. ... Another LIV Golf player, Laurie Canter, also is in the field. ... Three players from the top 50 in the world ranking are playing — Reed (No. 50), Ryan Fox (No. 47) and Thomas Pieters (No. 34). Fox was overlooked as a captain's pick for the Presidents Cup this week. ... Le Golf National, where Europe won the Ryder Cup in 2018, first hosted the French Open in 1991. It has been the site every year since 2002. ... The tournament for years was played in the summer as part of the schedule leading up to the British Open. It was a Rolex Series event in 2017 and 2018 leading to the Ryder Cup. ... The tournament dates to 1906.

Notes: The tournament pairs PGA Tour Champions players with participants in The First Tee program. ... Steve Stricker last week became the fifth player to win three times on the PGA Tour Champions this year. The others are Steven Alker, Miguel Angel Jimenez, Jerry Kelly and Padraig Harrington. ... Alker's lead in the Charles Schwab Cup is down to $97,378 over Harrington. Alker is in the field this week, while Harrington is taking the week off. The Irishman is playing next week in Scotland at the Dunhill Links Championship. ... Mark O'Meara is in the field. He was a five-time winner of the AT&T Pebble Beach Pro-Am on the PGA Tour. ... Vijay Singh also won the PGA Tour event at Pebble Beach and is playing this week. ... Spyglass Hill is considered the tougher of the two courses except in windy weather.